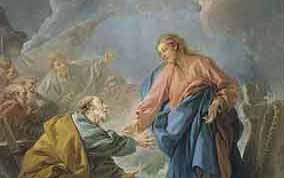 But don’t just listen to God’s word. Do what it says. Otherwise, you are only fooling yourselves. James 1:22 NLT

Don’t kid yourself; acting on God’s word is what activates God’s word. Hearing is not enough. What good would it do if we made the effort to hear God speak to us, and then not obey it?! The great Sermon on the Mount ends with this dramatic conclusion:

“Therefore, everyone who hears what I say and obeys it will be like a wise person who built a house on rock. Rain poured, and floods came. Winds blew and beat against that house. But it did not collapse, because its foundation was on rock.

Everyone who hears what I say but doesn’t obey it will be like a foolish person who built a house on sand. Rain poured, and floods came. Winds blew and struck that house. It collapsed, and the result was a total disaster.”

When Jesus finished this speech, the crowds were amazed at his teachings. Unlike their experts in Moses’ Teachings, he taught them with authority. Matthew 7:24-29 God’s Word Translation

And listen to what the brother of Jesus and first Pastor of Jerusalem says:

Don’t fool yourself into thinking that you are a listener when you are anything but, letting the Word go in one ear and out the other. Act on what you hear! Those who hear and don’t act are like those who glance in the mirror, walk away, and two minutes later have no idea who they are, what they look like. But whoever catches a glimpse of the revealed counsel of God—the free life!—even out of the corner of his eye, and sticks with it, is no distracted scatterbrain but a man or woman of action. That person will find delight and affirmation in the action. James 1:22-25 Message Bible

The Bible says that, “Faith comes by hearing,” but answered prayer comes by believing (Mark 11:24). Believing is the action side of faith. What good would it have been, after hearing Jesus say, “Come,” if Peter had never gotten out of the boat and walked?