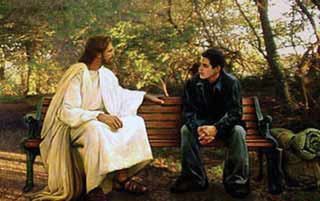 Yes, Jesus died on the Cross, but He was resurrected and rose triumphantly. He now sits on the throne of God, on the right hand of God the Father. He is no longer dead but alive. As Christians, we know this. Then why do so many carry on with their daily lives as if He is still dead?

I am the Living One; I was dead, and now look, I am alive for ever and ever! And I hold the keys of death and Hades. Revelation 1:18

They cannot see Him with their physical eyes, so they do not carry the moment-by-moment awareness that He is alive and walking with them. Most people, Christians included, are ruled by the five senses (see, hear, touch, smell, and taste), and because of that, the world appears more real than Jesus does. The world is seen with the eyes, but the Kingdom of God is known only with the heart. Furthermore, most people today follow their emotions or intellect and do not appreciate the things of the spirit. Spiritual things are not emotional, intellectual, or even physically factual. Most people today consider the things of the Spirit of God to be unsophisticated, irrational, and outright foolish. This includes many so called ‘church thinkers.’

The merely intellectual man rejects the teaching of the Spirit of God; for to him it is mere folly; he cannot grasp it because it is to be understood only by spiritual insight. I Corinthians 2:14 Twentieth Century New Testament

The things of God are revealed by the Spirit of God. They are not intellectually understood, and they are not recognized by the senses. It is only through the voice and revelation of the Spirit that we know God. Jesus may no longer be walking on the earth in bodily form, but He is still the Lord of all the earth. Now that He has ascended to Heaven, the Holy Spirit, the third Person of the Godhead, speaks and acts on His behalf. Jesus may be located bodily in Heaven but through the Holy Spirit He still reigns on earth.

Nevertheless, I tell you the truth: it is to your advantage that I go away, for if I do not go away, the Helper (Holy Spirit) will not come to you. But if I go, I will send him to you. John 16:7

Jesus has always been with us and will always be with us. He is our Savior, Healer, Advocate, and so on. He is present with each one of us – right now. Jesus is no longer limited by His body to be in only one place at a time, but now He can be anywhere and everywhere. He is not merely alive through Bible doctrine or Christian imagination. He is alive in reality, howbeit a spiritual reality, a reality which is more real than the physical reality around us. He is here in spirit and truth. Know that He is near. Carry on in your daily life as if He was near, because He is.

Jesus is seen with the heart and not the eyes.

If He is near then why do bad things happen? Good question, and a tough one. A tough one because the whole issue of evil was not something that man was supposed to know about. It was not God’s desire to allow evil, and the knowledge of evil, into the world. In the beginning, Adam and Eve were told not to eat of the tree of ‘the knowledge of good and evil’ (Genesis 2:17). But of course, they did, and through their disobedience, evil entered the world. Even worse than that, evil took over the world.

God had delegated the management of the world to Adam. When Adam disobeyed, management transferred to Satan. Satan, the Bible says, became the god of this world. However, we believers are delivered from the power of darkness through faith in God.

Who hath delivered us from the power of darkness, and hath translated us into the kingdom of his dear Son: in whom we have redemption, the forgiveness of sins. Colossians 1:13, 14

Now, those who have been delivered are commanded to go forth and spread the light of God to the rest of the world and to enforce the authority of God. When we do this in faith through the Name of Jesus, all the resources of Heaven are at our disposal. But if we do not, He will not step in – even if He is standing right next to you in the spirit.

Jesus is more real than the world.

Yes, He is alive, and yes, He is active on our behalf, but only through our faith and obedience. He loves everyone, but He responds with salvation only to those who believe Him (John 3:16). Believe that He exists and believe that He is there with you right now – He is.

And without faith it is impossible to please God, because anyone who approaches Him must believe that He exists and that He rewards those who earnestly seek Him. Hebrews 11:6

The Bible tells us to acknowledge Him in all our ways and then things will turn out for our good (Proverbs 3:6). How do we acknowledge God? By acting like He is there. Talk to Him and believe He hears you. Sure, it would be easier if He responded every time we spoke, but faith does not work like that. We must believe it. We must believe based on what we know in our hearts, that He cares and that He has the answer. We must trust that He is there even if we do not see, hear, or feel Him with our senses. This is, after all, a walk of faith.

Act as if He is there because He is