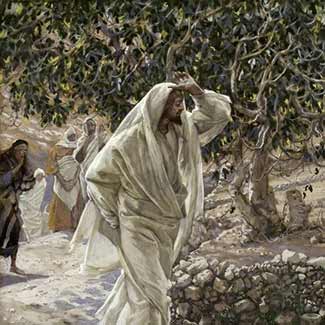 Jesus spoke to a fig tree. He then told His disciples that they could speak to the mountain they were standing on. Just as the fig tree obeyed Him the mountain would obey them.

Speaking authoritative faith to a situation or thing is a concept found throughout the Bible. God closely associates speaking with the operation of faith.

But what does it say? “THE WORD IS NEAR YOU, IN YOUR MOUTH AND IN YOUR HEART “– that is, the word of faith which we are preaching, that if you confess with your mouth Jesus as Lord, and believe in your heart that God raised Him from the dead, you will be saved; for with the heart a person believes, resulting in righteousness, and with the mouth he confesses, resulting in salvation. Romans 10:8-10

One is not complete without the other. It takes both believing and speaking to complete the process of salvation. In Hebrews Chapter 11, the famous chapter of faith, the very first example of faith is God Himself speaking the worlds into existence. Just like at the fig tree, God sets the pattern for man to follow.

But let us be clear; we are only referring to the speaking of faith. This is not about proclaiming anything you want and hoping that it will happen. To be able to speak faith you must already have faith in your heart – faith for exactly what you are about to say. Mark 11:23 is very clear. Your heart and your mouth have to agree, and both have to agree with God. You must know the will of God; and to know the will of God you must seek God and hear from Him.

So then, faith comes by hearing, and hearing by the (spoken) word of Christ. Romans 10:17

So will My word be which goes forth from My mouth; It will not return to Me empty, Without accomplishing what I desire, And without succeeding in the matter for which I sent it. Isaiah 55:11

Speak To Your Mountain