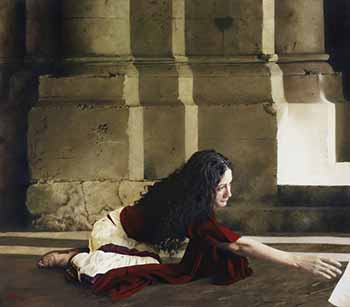 Let us read about a woman who was able to tap into the power of God and receive healing for a long-term illness, and she did it all on her own.

When Jesus had crossed over again by boat to the other side, a large crowd gathered around Him while He was by the sea. One of the synagogue leaders, named Jairus, came, and when he saw Jesus, he fell at His feet and kept begging Him, “My little daughter is at death’s door. Come and lay Your hands on her so she can get well and live.”

So Jesus went with him, and a large crowd was following and pressing against Him. A woman suffering from bleeding for 12 years had endured much under many doctors. She had spent everything she had and was not helped at all. On the contrary, she became worse. Having heard about Jesus, she came behind Him in the crowd and touched His robe. For she said, “If I can just touch His robe, I’ll be made well! ” Instantly her flow of blood ceased, and she sensed in her body that she was cured of her affliction.

At once Jesus realized in Himself that power had gone out from Him. He turned around in the crowd and said, “Who touched My robes?” His disciples said to Him, “You see the crowd pressing against You, and You say, ‘Who touched Me?

So He was looking around to see who had done this. Then the woman, knowing what had happened to her, came with fear and trembling, fell down before Him, and told Him the whole truth. “Daughter,” He said to her, “your faith has made you well. Go in peace and be free from your affliction. Mark 5:21-34

This woman was sick for 12 long years and had spent all that she had to get well, but had only gotten worse. Nothing worked. Now she was deathly ill and poor. This illness also carried with it a social stigma, one that kept her from going out in public. She was a lonely poor insignificant woman in a harsh and corrupt religious man’s world.

Alone, sick, and broke, the odds were against her and nobody would have faulted her for giving up, but she did not. She had heard of Jesus. She had heard that He was healing people – people just like her. Could He heal her? Would He heal her?! Something deep inside of her said, “Yes.” And that deep something also told her that all she needed to do was touch the edge of Jesus’ clothing and she would be made whole.

She started to say to herself, “If I am able touch to His clothes, I will be healed of this disease.” At first she probably only thought it in her heart, then spoken as a faint whisper, and finally as a soft yet bold declaration to herself. She said it to herself continually – at her home, on her way to  Jesus, and finally as she pushed her way through the unruly and selfish crowd.

It would not be easy. She was not even supposed to be out in public. She finally spots Jesus walking along, but He is with Jairus, one of the leaders of the local Synagogue. Jairus was the last person she wanted to see today, but she cannot stop, she must go on. She plans to touch Him secretly from behind. Hopefully He will never know.

She does it, and Jesus doesn’t feel it, except that He does feel the power of God leave His body. “Somebody touched Me,” He shouts out. The disciples are amazed. Everybody is touching Him. However, this was no ordinary touch. This was the touch of faith, a touch that pulls the power of God. He just had to know who it was that had that kind of faith, a faith able to pull power from Him without His knowledge. She too knew that power had gone out of Him and into her. She also knew that she had been healed.

Terrified, she comes forward and tells her story to Jesus, in front of Jairus and the whole crowd. Jesus then tells everyone that it was her faith that made here whole, and that she could now go home completely healed of her disease. She may have been secretly healed but she has now been publicly vindicated and honored as a woman of faith. She will carry the healing for the rest of her life, and that badge of honor for all eternity.

This lonely sick forgotten woman moved the hand of God by the sheer force of her personal faith. She is the only person recorded in the Bible to have been healed by Jesus without His even knowing about it. She alone determined the time of her visitation, and in so doing impressed Jesus, the Son of the Living God. For that, she is in the Bible, and no longer forgotten.