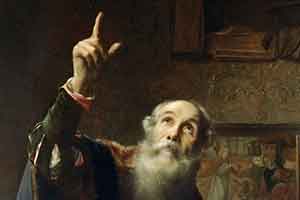 “Now faith is the substance of things hoped for, the evidence of things not seen. For by it the elders obtained a good report. Through faith we understood that the worlds were formed by the word of God, so that things which are seen were not made of things which do appear” (Heb.11:1-3).

The expression “of things HOPED FOR” (Hebrews 11:1) lets us know that there are things that can be hoped for and things that can not. First, let us understand the difference between a desire and a hope. We may have a desire for many things, but a hope requires a plausible foundation or reason for its possibility. The question arises, “Upon what FOUNDATION are you basing your hope”? We may hope for many things but if our hope is not based on a foundation then it becomes mere wishful thinking.

A student that desires better grades but never studies has no basis or foundation for hope. A man who sincerely needs a good job but will not do all that he can to look for one has no grounds to hope. I may wish that I was 6′-11″ and could play for the NBA but that will never happen. That is a dream and will never become a true hope. Desires and dreams can remain without a foundation. A hope must have a foundation, a plausible reason one can expect it to happen, for it to become a true expectation.

Our hopes are based on the promises in the Bible. If he promised it, then there is a potential for us to receive it. The fulfillment of the desire, if promised in the Bible can now become a legitimate hope. Not a natural hope but a God hope. And once faith comes, that hope no longer remains a future expectation, but now becomes a future reality. Faith is the God-given ownership of ‘things hoped for and the evidence of thing not (yet) seen.’

Our hope, as well as the hope of others, depends upon what our hope is based upon! Our God hopes all rest upon, “how faithful is God to His promises!” Two points to consider: 1. If there be no God, or 2. If His promise is not true; then we would have no foundation whatever for our hope. Our hope would be groundless. As far as our eternity is concerned, it all hinges upon the fact that God exists and He is a rewarder of those that diligently seek Him (Hebrews 11:6). The only foundation for our hopes is the faithfulness of God as expressed in the promises of God.

Some of the above was taken from Oscar Baker’s What is Faith? Part1 and Part2