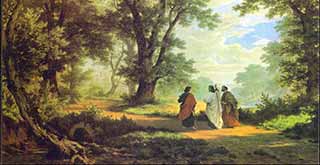 by Peter Smythe – Used by permission

“And Jesus answering, saith to them, “Have the faith of God.” (Worrell).

In beginning a series on faith, I thought it best to start out with the small, but controversial statement that Jesus made about faith in Mark 11:22. While the statement is just three Greek words, it has generated quite a stir in the Body of Christ for the last twenty or so years. Word of Faith preachers, especially Kenneth Hagin, have been maligned for holding to the translation, “Have the faith of God,” or “Have the God-kind of faith,” instead of the “orthodox” translation of “Have faith in God.” From the research that I’ve done, I believe that A.S. Worrell puts it best:

“Have the faith of God; translators generally render this, “Have faith in God;” but if this had been the thought, it would have been easy to have expressed it in the Greek. Faith originates with God; and those who have real faith have His faith; the same perhaps as “the faith which is of the Son of God.” Gal. 2:20. Worrell, A.S., Worrell New Testament, note on Mark 11:22.

A.S. Worrell’s translation is used by many serious Bible students because it is deemed to be a more accurate translation of the original text than the King James. Worrell’s translation in the past was preferred by Baptists because of his rendering of the Greek word for baptism as “immersion.” In this note, he strikes upon the grammatical and theological problems posed by rendering Mark 11:22 as “faith in God.” There are too-many-to-count instances in the New Testament where the word ?? (in) is used to convey the very same thought that exete pistin en theo (“faith in God”) would have. Since Jesus didn’t say exete pistin en theo(“faith in God”), there is more than a good chance that He purposely meant “possess the faith of God.”

For those who’d like a little more (with the Greek) and to avoid any run-ins with Rick Nanez, let me add the following:

First off is Jesus’s word, exete. That word is the imperative for “to possess or contain, have or own” with the understood subject of “you” or “y’all.” The word’s nuances include “to take hold of something” or “to grip” or “of holding something in one’s hand.” This definition comes from A Greek-English Lexicon of the New Testament and Other Early Christian Literature which is otherwise known as BDAG by Greek scholars. The Louw & Nila Greek/English Lexicon of the New Testament defines the word as “to have or possess objects or property (in the technical sense of having control over the use of such objects) – “to have, to own, to possess, to belong to.” This lexicon is also a favorite of scholars. Personally, I like the term “possess.” For instance, “Possess the faith of God.”

The word pistin is translated “faith” throughout the New Testament.

The “controversy” surrounds the nature of the grammatical form of theou (“God”). In Greek, the grammatical form is called a “genitive” which usually denotes possession which is “subjective.” See Mounce, Basics of Biblical Greek at 44. In that sense, “Have faith of God” is perfectly doable. The trouble comes when the theologians argue whether Jesus’s statement is “subjective” or some other kind of genitive (“objective”). I say “theologians” because grammarians can’t make the call on this one. It is somewhat like the English word “gay.” Does “gay” mean happy-go-lucky (like it used to) or does it mean sexual preference (like it does now). Reading “Is he gay?” doesn’t answer the question unless you know its context, a 1930’s novel or a 2007 political referendum.

While Mark 11:22’s use of the genitive may be in the eye of the theological beholder, A.S. Worrell does not stand alone:

“Here again we must appeal to the root idea of the genitive as the case of genus or kind. The resultant idea is due to the context and one must not suppose that the Greek genitive means all the different English prepositions used to translate the resultant idea. Thus Mark 11:22 exete pistin theou we rightly translate ‘have faith in God,’ though the genitive does not mean ‘in,’ but only the God-kind of faith. Cf. Romans 3:22. Robertson, A. T., A Grammar of the Greek New Testament In the Light of Historical Research at 500.

A.T. Robertson was known as the “granddaddy” of all Greek grammarians when he was alive. His book, A Grammar of the Greek New Testament in Light of Historical Research is considered one of the most advanced Greek grammars. As is shown in this quotation, while Robertson agrees with the “faith in God” translation, he emphasizes that “in” doesn’t mean “in” as we, English speakers think of it. He marks out that the genitive inculcates a “genus” or “kind” and holds that Jesus’s phrase involves the “God-kind of faith.”

“Although pistin theou is often taken as an objective genitive (i.e. faith in God), it is possible that a genitive of origin should be preferred (i.e. faith of God); see also Mark 1:14 [to euangelion tou theou – good news of God]; Acts 19:20 [tou kuriou o logos – word of the Lord]; Romans 1:1 [doulos Christo Iesou – servant of Christ Jesus]; 17 [dikaiosune theou – righteousness of God], 3:21-22 [dikaiosune theou – righteousness of God; pistews Iesou Christou – faith of Jesus Christ]; 4:11 [dikaiosunes tes pistews – righteousness of the faith], 13 [dikaiosunes pistews – righteousness of faith]; 15:16; Phil. 3:9). We have already drawn attention to references in Jewish literature suggesting that faith was conceived of as an eschatological gift from God. (e.g. 1 Enoch 108:13; Sib. Or. 3-584-5; Test. Isaac 1.8) and this background would be consistent with the Markan text of pistin theou,where faith is portrayed as a means by which acts of God are performed. Wallis, Ian, The Faith of Jesus Christ in Early Christian Traditions at 53-54.

Ian Wallis’s book, The Faith of Jesus Christ in Early Christian Traditions is an excellent study of the use of the genitive construction in the Greek New Testament. (In this quote, the bracketed parts are mine. I sought to demonstrate the Greek genitive construction and English translation in the cited verses.) Wallis holds Mark 11:22 out in the same manner as both Worrell and Robertson. One interesting thing that Wallis has confirmed in his book is that the Apostle Paul never used an objective genitive in his texts which raises questions about the “orthodox” “faith in God” translation.

While Richard Hays says that Mark 11:22 is an objective genitive (i.e. faith in God), he concedes that “it is probably wisest to accept that the objective genitive construction after pistis is possible, though rare, in N.T. Greek.” Hays, Richard, The Faith of Jesus Christ at 149. In his book, Hays states that Mark 11:22 is an objective genitive (i.e. faith in God), but then quickly steers away from that with this quote. Greek Grammarian Daniel Wallace takes the same position as Hays in saying that Mark 11:22 is a “clear example of pistis + objective personal genitive,” but concedes that similar genitive constructions, such as Galatians 2:16, 20 (whether pistews Iesou Christou is “faith in Christ” or “faith of Christ”) must be resolved theologically because the grammar is “ambiguous.” Wallace, Daniel, Greek Grammar Beyond the Basics at 119.

In this series on faith, we will see that “faith of God” in the sense of Worrell’s, Robertson’s, and Wallis’s constructions are consistent throughout the Gospels, Acts, and the Epistles. Indeed, it appears that only those who actually take Jesus at His word in Mark 11:22 as “[you] possess the faith of God” actually get to experience verses 23 and 24.