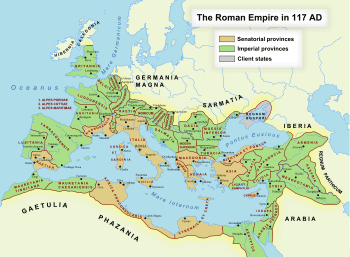 The only thing first century Christians had to do to enjoy the prosperity and ‘Roman Peace’ (Pax Romana) of their day was fit in, but they refused.

The Roman Empire was tolerant of other religions, but only if they were tolerant of the Empire’s beliefs. After conquering a region, the Roman army would stage a victory march; images of the local area’s deities and those of the Roman Empire would be carried side-by-side. As long as they accepted Roman beliefs they too were accepted, and could enjoy the Roman prosperity. If they would not accept, the Empire would turn brutal.

The Greek word translated ‘gospel’ in the New Testament was first used by the Romans themselves to describe that very Roman Peace. And from Caesar Augustus on, many of the Roman emperors were considered divine and were referred to as a ‘king of kings’ and as a ‘son of god’.

Using these terms to refer not to the Roman Empire but instead to the Kingdom of God was an obvious public rebuke. It gives a glimpse into just how aggressive the Holy Spirit is toward the world’s system. And by using these terms in public speech, it showed just how radical, and subversive, the early Christians were willing to be. Their allegiance was to God and God alone. They allowed no room for the things of the world. Of course, there was a cost for this, and they paid dearly for it. But even with this high cost, the Church of that day grew in less than 100 years to include over ten percent of the empire.

The craving of the world is for tolerance. How dare someone judge someone else’s actions in a world where all is accepted? Sin demands acceptance and flies into a rage when it does not receive it. Radical Christianity is enmity with the world. History tells us that when the Church is clean, it is radical. When it is overly tolerance, it is corrupt. The Church is not to be radical simply for the sake of being radical. The radicalism arises out of the natural conflict that occurs when the world is confronted by the behaviors and beliefs of Christ.

Faith is following what you know in your heart from God. We are not to seek out conflict, but we will find it. The Christian walk is the path of undesired conflict. It is a walk of kindness and peace, yet without compromise.

“When principles that run against your deepest convictions begin to win the day, that battle is your calling, and peace has become sin. You must at the price of dearest peace lay your conviction bare before friend and enemy, with all the fire of your faith.” Abraham Kuyper (1837–1920), theologian, statesman, journalist, and Prime Minister of the Netherlands