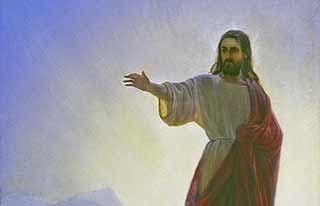 However, according to the scriptures, the death, burial, and resurrection of Jesus Christ completely undid all that the fall of man had wrought. We do not see it because we are still living in a fallen world. The world itself was not redeemed; its time is yet to come. Only believers in Christ have received the right to become children of God and citizens of His Kingdom. Now it is up to us to grow in what Christ has done for us and expand His Kingdom for others.

What God did for mankind through Christ was massive. God’s response to the fall was overwhelming, so overwhelming in fact that it almost appears as if the fall of man was a trap, a setup, a necessary first step toward God’s grand purpose for mankind. Could this whole affair have been a divine trap from the beginning? Maybe so.

But we impart a secret and hidden wisdom of God, which God decreed before the ages for our glory. None of the rulers of this age understood this, for if they had, they would not have crucified the Lord of glory. I Corinthians 2:7, 8

But they did crucify Him, and after Christ’s victorious Resurrection, the merely immortal creation of the Garden had become the New Creation of The Kingdom (II Corinthians 5:17). In the Garden God created humans, but at the Resurrection He created Christians. The ‘First Adam’ has now been replaced by the ‘Second Adam,’ namely, Jesus Christ and we are eternally united with Him, spirit, soul, and body.

What is man that You take thought of him, And the son of man that You care for him? Yet You have made him a little lower than God, And You crown him with glory and majesty! Psalm 8:4, 5

But one has testified somewhere, saying, “WHAT IS MAN, THAT YOU REMEMBER HIM? OR THE SON OF MAN, THAT YOU ARE CONCERNED ABOUT HIM? “YOU HAVE MADE HIM FOR A LITTLE WHILE LOWER THAN THE ANGELS; YOU HAVE CROWNED HIM WITH GLORY AND HONOR, AND HAVE APPOINTED HIM OVER THE WORKS OF YOUR HANDS; YOU HAVE PUT ALL THINGS IN SUBJECTION UNDER HIS FEET.” For in subjecting all things to him, He left nothing that is not subject to him. But now we do not yet see all things subjected to him.… Hebrews 2:6, 7, 8

The above verses are not talking about Jesus. They are referring to us – you and me. The next verse refers to Jesus:

But we do see Jesus–made (as man) lower than the angels for a short time so that by God’s grace He might taste death for everyone–crowned with glory and honor because of His suffering in death. Hebrews 2:9

Read the whole second chapter of Hebrews (see more here). It goes on to say that this Jesus, who made all of creation, would lower Himself, take on manhood, and suffer for our disobedience so that we could once again be part of the family and congregation of God. He could then call us ‘holy brethren, partakers of the Heavenly calling.’ (Hebrews 3:1) We as God’s man (and woman), are now restored to spiritually rule with Him and for Him.

We are told not to think of ourselves more ‘highly than we ought,’ but then, we should not think of ourselves any less than we ought either. We are after all, ‘seated with Christ in Heavenly places.’ That should mean something. Read the following scriptures; they describe a class of being unfamiliar to this world. And remember, they are referring to you and me.

Christians Are a Totally New Creation

Therefore if any man be in Christ, he is a new creature: old things are passed away; behold, all things are become new. – II Corinthians 5:17

For in Christ Jesus neither circumcision avails anything, nor uncircumcision, but a new creature. – Galatians 6:15

Till we all come in the unity of the faith, and of the knowledge of the Son of God, unto a perfect man, unto the measure of the stature of the fullness of Christ: – Ephesians 4:13

And have put on the new man, which is renewed in knowledge after the image of him that created him: – Colossians 3:10

Beloved, we are God’s children now, and what we will be has not yet appeared; but we know that when he appears we shall be like him, because we shall see him as he is.  I John 3:2

But go to My brothers and tell them that I am ascending to My Father and your Father–to My God and your God.”
John 20:17b

And to know the love of Christ, which passes knowledge, that ye might be filled with all the fullness of God. – Ephesians 3:19

The mystery which has been kept secret from all ages and generations, but has now been revealed to His people, to whom God would make known what is the riches of the glory of this mystery among the Gentiles; which is Christ in you, the hope of glory: Colossians 1:26, 27

For you have died and your life is hidden with Christ in God. – Colossians 3:3

Christians Are Heirs of God and Joint Heirs with Jesus Christ

And if children, then heirs; heirs of God, and joint-heirs with Christ; if so be that we suffer with him, that we may be also glorified together. – Romans 8:17

And hath raised us up together, and made us sit together in heavenly places in Christ Jesus: – Ephesians 2:6

Blessed and holy is he that hath part in the first resurrection: on such the second death hath no power, but they shall be priests of God and of Christ, and shall reign with him a thousand years. – Revelation 20:6

Christians Have Been Given Divine Attributes

But of him are ye in Christ Jesus, who of God is made unto us wisdom, and righteousness, and sanctification, and redemption: – I Corinthians 1:30

For who hath known the mind of the Lord, that he may instruct him? But we have the mind of Christ. – I Corinthians 2:16

Blessed be the God and Father of our Lord Jesus Christ, who hath blessed us with all spiritual blessings in heavenly places in Christ: – Ephesians 1:3

That the God of our Lord Jesus Christ, the Father of glory, may give unto you the spirit of wisdom and revelation in the knowledge of him: – Ephesians 1:17

For this purpose also I labor, striving according to His power, which mightily works within me. – Colossians 1:29

According as his divine power hath given unto us all things that pertain unto life and godliness, through the knowledge of him that hath called us to glory and virtue: – II Peter 1:3

Christians Are To Do the Works of Jesus

I assure you: The one who believes in Me will also do the works that I do. And he will do even greater works than these, because I am going to the Father. John 14:12

For we are his workmanship, created in Christ Jesus unto good works, which God hath before ordained that we should walk in them. – Ephesians 2:10

If any man speak, let him speak as the oracles of God; if any man minister, let him do it as of the ability which God gives: that God in all things may be glorified through Jesus Christ, to whom be praise and dominion for ever and ever. Amen. – I Peter 4:11

It is hard to believe that these scriptures are talking about us, but they are. However difficult it is to believe it, we must. Read these scriptures over and over, confess them, and meditate on them. Even if you do not understand them, accept them and allow them to grow inside of you. Let the unworthiness and spiritual dullness of the past life fade away. Remember, we are to ‘put on the new self, which is being renewed in knowledge after the image of its creator.’ (Colossians 3:10) When we think back over the wonderful things God did for us on the Cross, we must not forget about the wonderful things He did in us, and the wonderful Person Who now lives within us.

We must rise up and be all that God has purchased for us. We are more than saved victims – holy and cleansed but weak and dominated. We are God’s grandest creation. The goal of redemption is for us to grow to the ‘stature of the fullness of Christ’ – Himself! That is God’s goal for us and it is His expectation. He will judge us according to that expectation.

We are God’s children now, and what we will be has not yet appeared…