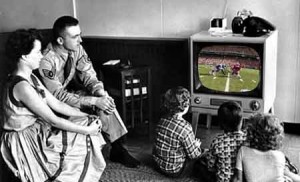 How would you watch a game if you knew beforehand that your team had already won?

Imagine that a person knew that he was going to miss an important sports event, so he had it recorded to watch at a later time. However, before watching the game, he inadvertently found out that his team had won. How would the knowledge of his team’s victory affect his watching of the game?

How would he react if his team played poorly in the first half? Would he get nervous? Not if he was confident in his knowing that his team had won. He would know that a turnaround was on the way. He would have the knowledge and confidence, that no matter how bad it may look, something would have to happen to give his team the victory. In fact, instead of becoming nervous, he would become excited, anticipating that miraculous turnaround moment. He would know that it would have to occur because his team had already won!

He has this confidence because he is now watching the game backward, from the perspective of the known ending. Everything now is being viewed in relation to the knowing that his team has already won. The only remaining unknown is the manner in which it will happen. The moment he found out that his team had won, winning stopped being a possibility (a hope), and instead became a known fact, which is the basis of faith. How silly would it be to watch a rerun of a game where you already knew your team had won, and still worry about whether they will win?

Everything now is being viewed in relation to the knowing that his team has already won.

His level of trust in the victory is determined by his level of trust in the source of the news.  If the source was credible, he could be extremely confident.  If, on the other hand, the source was, say, a stray comment overheard from a stranger, he could have room to doubt. In other words, the weight of the observed circumstances only matters if the information source is not trusted or credible.  The only thing that matters is how well he heard and how trusted is the source.  Everything depends on that and that alone.

Being in faith is much like watching this recorded sports event.  We watch the players sweat and strain and run back and forth.  There are moments when things look good, and moments when things do not look so good, but in the end, it is all irrelevant, we know who wins.

Faith is determined by what we know prior to the event.  If we know no more than anybody else before the game, then we will be the same as everybody else during the game.  True faith knows beforehand what will happen.  Faith is a pre-knowledge of the coming victory, and this knowledge produces peace.  We may know the coming victory in detail or we may know it simply by the peace in our heart.  Either way, it communicates a knowledge of victory, and by it we have faith.

If we know no more than anybody else before the game, then we will be the same as everybody else during the game.

This knowledge of victory that gives us faith is based on a ‘knowing’ Word from God.  Faith is God’s Word becoming alive to us in a real and personal way, concerning a real and specific situation or thing.  Faith is the result of God speaking the outcome to our heart.  And when we hear the outcome, we know the outcome. It is when we stand on this knowing that we are standing on His Word in faith. This Word that we heard is now a knowing that we must receive and act upon. This is exactly what was happening with Paul in Acts Chapter 27, when the boat was in danger of sinking from a terrible storm. Paul went off to seek and hear from God. An angel came and spoke to him about a coming shipwreck and that all would be saved. After hearing from God, he was able to announce to everybody on board the following, “…I believe God that it will turn out exactly as I have been told.” (Acts 27:25) He now knew how it would ultimately turn out.

So faith comes from hearing, and hearing by the word of Christ. Romans 10:17

The victory and peace we can walk in during the game is determined by our hearing from God prior to the game.  To have this knowledge of victory we must spend the time necessary to hear solidly from Him.  The stronger the trust in the ‘hearing,’ the less of an impact the so called ‘facts’ of the game will have on us.  Once we know the outcome, we own the outcome.  Then we are expected to protect and retain the ownership of that ‘knowing’ till the end, through patience.  The writer of Hebrews says that, ‘by faith and patience (we shall) inherit (or receive) the promises (the collective ‘hopes’ of God’s Word).’ In the story above, Paul had to walk in obedience in order to receive all that God had spoken to him.

If we had knowledge of God’s will in every area of our life we would have peace in every area of our life.  Let us first, labor to hear from God, and then we will be able to watch the game of life with peace.  The things received from God in private determine the victories accomplished later in public.  We are told ‘not to lean to our own understanding,’ but rather, our ears are only to be on what He says.  Nothing else matters.

But life is not that simple.

Granted, in real life it’s not as simple as this. In life, we are not merely watching a game; we are in the game. We are the ones going back and forth, sweating, straining, and getting hit. Our loved ones are playing and they are also getting hit. Some of them may even be playing for other team, and that really hurts. Moreover, our main opponent (the devil) is a very talented player, and he doesn’t play fair. He is a great deceiver and he knows how to use our own weaknesses against us. Nevertheless, the principals are still the same, and with God, we are capable of winning. The Bible tells us that we are more than conquerors through Him who strengthens us. To win, we must practice and practice till we are able to play the game of life with love and faith and peace.

We are more than conquerors through Him who loved us.

The Bible tells us that we win, and that is all there is to it.  Now, let’s go out and throw a victory party, and give Jesus the MVP award.