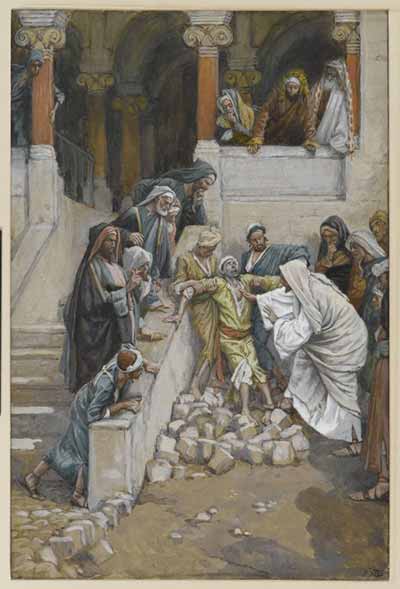 I once read a testimony by I. J. Jamison who was formerly a Presbyterian minister. He had been giving some lectures in a western state when a forest fire broke out in the area. The fire was raging, and valuable timber and animals and some homes were being destroyed. The fire was simply burning out of control. Rev. Jamison was in the barber shop one morning getting a shave. The barber had put a towel on his face, and as Rev. Jamison was lying there in the chair, a man came in with a telegram. The man with the telegram said he didn’t know what to do with the telegram. Someone had sent it around the city. It said, “Pray for rain.” The fire had gotten so out of hand that there was no telling what would happen if it didn’t rain.

Someone said, “Well, there is a preacher in that chair. Maybe you could give the telegram to him.” About that time, the barber raised the chair and took the towel off the preacher’s face and asked him if he would pray for rain. Rev. Jamison said, “We don’t believe in that sort of thing.”

So someone in the barber shop spoke up and said, “Well, there is a little tent meeting going on at the edge of town, and they believe in praying for anything.” Someone asked, “Who are they?” The answer was, “I don’t know. Some of them are `Holy Rollers.”‘ No one would volunteer to take the telegram out to the tent, as they were all afraid of those “Holy Rollers.” Rev. Jamison said if no one else would do it, he would. Someone said, “They have a prayer meeting about 10:00 every morning.” So the next morning, Jamison took that telegram out to the tent meeting. He said there were about twenty people there. Three or four of them were kneeling on the platform praying. He didn’t know which one was the preacher, but he picked out the one he thought might be and tapped him on the shoulder. The man looked up and Rev. Jamison said to him, “Here is a prayer request that someone asked me to bring to you.” The man took it and read it.

Meanwhile, Rev. Jamison backed away from the group just to see what they would do. Rev. Jamison said the man got up and began to holler for everyone to stop praying. (All the people had been praying all at once, out loud.) He hollered until he got everyone to listen and then he read the prayer request. He asked how many believed God would hear, and they all lifted their hands. So he said, “All right, let’s go to prayer about it.” Rev. Jamison said that all twenty of them began to pray and they just prayed up a storm. One by one they ceased, and finally the man said to them, “How many of you believe God heard you?” They all raised their hands. He said, “Then let’s lift both hands and praise God for the answer.” They raised their hands and praised God for rain. Rev. Jamison said later, “That man shocked me.” The preacher turned and handed the telegram back to Rev. Jamison and said, “Here, send a telegram back and tell them it will be raining by 10:00 tonight.”

Rev. Jamison said, “I went back to town to the barber shop and told them what the man had said.” All the men in the barber shop slapped one another on the back and laughed about it because they had all read the weather report and no rain was in sight for days. Jamison and his wife were in bed by 9:00 that evening. He said he happened to see the moon shining bright and clear outside. His wife had washed some laundry and had left it hanging on the line. When he saw the clothes on the line, he remembered what that preacher had said about the rain. He began laughing and told his wife what had happened that day. They both lay there and laughed. He said to her, “You had better get your laundry in because it’s going to rain.” They both laughed and she said, “I read the evening paper and it’s not going to rain.” He said they must have talked and laughed about it until about 9:30 or so and then they fell off to sleep.

After a while, Rev. Jamison was awakened by what sounded like thunder. He thought he was hearing things, but then he saw lightning flash, and before he could get out of bed, it began to rain in torrents. He said he got up and turned on the light and it was exactly 10:00 p.m. Jamison said, “Then I couldn’t go to sleep. I thought, Did God hear those people? Is there something to that? Do they know something I don’t know? What about that?” He began to slip into those Pentecostal meetings after his own services were dismissed, sitting in the very back. After Jamison finished his lectures in this town he was visiting, he went back to his home state. He would slip over to the little Pentecostal church there at first, and he began sitting on the back row. But he kept sitting closer and closer to the front, until he finally sat on the front row. He said he took notes on the scriptures and messages and would go home to read in the privacy of his study, and there he discovered the truth of God’s Word. He thought, Why didn’t I see the truth before, particularly scriptures on the Holy Ghost? He continued to go to Pentecostal services, just watching and observing. There was a woman in this Pentecostal church whose daughter was in a mental institution. Jamison heard the mother talking to several folks about meeting her at a certain time in the morning outside the mental institution.

Jamison said, “I just intruded on their private conversation because I didn’t want to miss out on anything. I found out that they were going to meet outside the institution, and that this woman was going to cast the devil out of her daughter. She had about a dozen spiritual women who were going along with her to back her up in prayer. “I just blurted out, `Can I come along?’ And they replied, `All right, meet us out there at 10:00 in the morning.”‘ Jamison met them there. He said he wondered how all of them were going to get inside the institution. But he said he had been around them long enough to believe that because of their faith in God, they could do just about anything.

The woman told the attendant that she wanted to see her daughter. Jamison related, “We all went parading down the halls.” Then the woman said to the guard, “I want you to open the door and let me in that cell because I’m going to pray for my daughter.” The attendant said, “Why, you can’t do that! She’ll kill you! She’s violently insane.” Jamison said they stopped before a padded cell where there was a woman who looked more like an animal than a human. Her hair had grown long, her nails were long and claw-like, and she hissed and spit at them like an animal. The attendant told the woman he couldn’t let her into the cell because he would lose his job if he did, but all the time he was unlocking the door! The woman stepped in and he locked the door again.

Rev. Jamison said he and the attendant were the only men there, and they stepped back to watch. The twelve women who had come with them fell on their knees and prayed quietly. They didn’t look at what was happening in the cell; they just knelt down and all prayed quietly. As Jamison and the attendant watched, the daughter backed away and climbed about halfway up that padded wall, then made a leap at her mother like an animal. Her mother sidestepped her and the daughter fell (the daughter was a woman in her early thirties). When her daughter rolled over to get up, the mother jumped on her and held her down and said, “Come out of her, devil, in the Name of Jesus.” Jamison said, “That mother got her nose down within an inch of her daughter’s nose, and she said for about ten minutes over and over, `Come out of her, devil, in the Name of Jesus.”‘

Suddenly the daughter relaxed, looked up, and said, “Mama! Is that you, Mama?” The daughter threw her arms around her mother’s neck and hugged her and kissed her. Jamison said, “I am a witness to the fact that the authorities dismissed that woman that day as being totally well.” Then he said, “Bless God, I want the Holy Ghost. If people can pray like that, I’m a candidate.” And, thank God, he was gloriously filled with the Holy Ghost, speaking with other tongues.