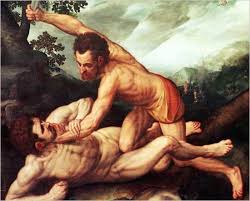 Caroline Barnett (Co-Pastor of the Los Angeles Dream Center, with her husband Pastor Matthew Barnett, who is son of Pastor Tommy Barnett, Senior Pastor of Phoenix First Assembly of God) wrote the book Willing to Walk on Water.

In the opening chapter, she tells the story of when she first saw the Invisible Children’s documentary. Afterward, she wrestled with God, asking Him, “How could you allow these awful things to happen?” Later that night, she writes, He whispered this to her heart:

The angel of the Lord appeared to (Gideon) and said to him. “The Lord is with you, O valiant warrior.” Then Gideon replied, “O Lord, if the LORD is with us, why has all this happened to us? Where are all his wonders that our ancestors told us about when they said, ‘Did not the LORD bring us up out of Egypt?’ But now the LORD has abandoned us and given us into the hand of Midian.” Judges 6:12, 13

When Israel did evil before the Lord, God would send evil upon them. In this instance the evil came through Midian, for in Judges 6:1, it says, “The people of Israel did what was evil in the sight of the LORD, and the LORD gave them into the hand of Midian seven years.” When Israel would turn back to the Lord it usually required someone acting in obedience and faith to restore the blessings of God. Gideon would go on to do exactly the same types of wonders that he was questioning God about earlier.

Overcoming evil does not happen on its own. Gideon wondered why God was allowing this evil on the people. God responded by telling him to take His power and do something about it.  It says of Jesus during His walk on earth:

“You know Jesus of Nazareth, how God anointed Him with the Holy Spirit and with power, and how He went about doing good and healing all that were oppressed of the devil, for God was with Him.” Acts 6:38

This verse does not speak to the origin of evil but it does speak to our proper response to evil – do good and heal all that you can through the power of the Holy Spirit.

We have been given access to His power and ability through the Name of Jesus and we are commanded to act in His stead to do all that we can to reduce the world’s suffering. It will not fully cease till He returns but we can make a tremendous impact until then. Just because we do not understand evil does not mean that we are not able to fight it with everything He has given us.

So, (insert your name), why are you allowing evil to continue?