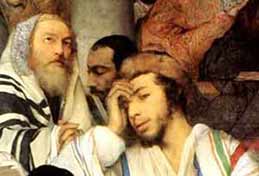 It is important for us to understand that God, being one in His nature, is always able to say the same thing to everyone who hears Him. He does not have two different messages about grace or love or justice or holiness. Whether it be from the Father or the Son or the Holy Spirit, the revelation will always be the same. It points in the same direction, though using different ways and different means and different persons.

In the past God spoke to our forefathers through the prophets at many times and in various ways. Hebrews 1:1

Begin in Genesis and continue through the Old and New Testaments and you will perceive the uniformity. Yet there are ever-widening elements in God’s revelation to mankind. In early Genesis the Lord spoke in terms of a coming Messiah, foretelling a warfare between the serpent and the Seed of the woman. He noted the victorious Champion-Redeemer who was to come.

The Lord told Eve in very plain words of future human pain in childbearing and of woman’s status in the family. He told Adam of the curse upon the ground and of inevitable death as the result of transgression. To Abel and to Cain He revealed a system of sacrifice and through it a plan of forgiveness and acceptance.

Whether it be from the Father or the Son or the Holy Spirit, the revelation will always be the same.

God’s message to Noah was of grace and of the order of nature and government. To Abraham He gave the promise of the coming Seed, the Redeemer who would make an atonement for the race. To Moses, He gave the Law and told of the coming Prophet who was to be like Moses and yet superior to him. Those were God’s spoken messages “in the past.”

To those who have preceded us, God spoke at many times and in various ways. Climactic in His communication has been Christ the Son. And God continues to speak to us today. Are we listening? Read More