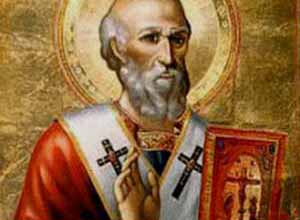 St. Athanasius (c. 297 – 373) was a member of the First Ecumenical Council at Nicaea in 325 A.D., and he wrote this book on the Incarnation. It is still read today and is a classic of the faith. It is a short wonderful read.

Jesus was fully God and Fully Man. We grasp His Deity but His Humanity is more difficult to understand. However, it is His Humanity that speaks to us on how we are to act and believe. Did He carry out His miracles as God or Man? Your answer will go far in deciding whether you believe miracles are still viable today. He told His disciples that He could do nothing outside of the work of the Holy Spirit, and that they who believe in Him would do greater miracles than His. How can this be?

He took on humanity to the point that His own family did not know nor believe that He was truly God. This is astounding. We will never fully understand His Incarnation this side of Heaven but this book will help. Wikipedia – St. Athanasius

The Incarnation of the Word by St. Athanasius – Other faith filled free books