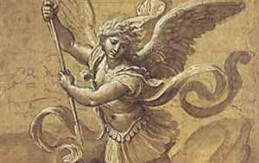 By John A. MacMillan

The record of demon possession did not appear first in the Word of God; communications with the unseen world have characterized the religious beliefs and practices of all nations from the very earliest times. These beliefs are in accord as to the existence and the working of superhuman intelligences in the midst of mankind. There has been at all times, and still is, much superstition mingled with human beliefs. But clearer light is steadily growing, and it is becoming possible to discern between the various forms of demon working that are seen among us, and to quietly and sanely dispossess the spirits which enter into the bodies of men and women, and to comfort the minds and allay the fears of those whose condition is less serious.

An important fact, but one much disputed among Christian students of this subject, is that believers may become possessed. It is urged that the Spirit of God cannot dwell in the same body with demons and that those who so suffer must of necessity be the unsaved. The belief is a natural one and has much to support it from the side of reason. Dealing, however, with actual cases of demon possession, where the evil spirits were in full control, the writer can testify that, however it may be explained, sincere Christians have been sufferers and have opposed and resisted the indwelling spirit, pleading the blood of the Lamb and calling on God for deliverance.

Possession may occur in many ways, and its onset is often most difficult to trace. Children are not infrequently victims of indwelling spirits (Mark 9:21); a number of cases have been brought to our attention where those who are quite young have shown every sign of being under demon control. In an older person, the history indicated that the condition had existed from the time she was about six or seven. How a child can come into this unfortunate situation can only be surmised.

Contact with spiritism, often in entire ignorance of the danger, is a frequent cause of possession. In one instance a Christian girl, whose mother to whom she was greatly attached had passed away, was told that it was possible to contact the spirit of the mother by means of a medium. Not aware of the evil of such approach, she was soon entangled in the mysteries of the seance. Before long the medium, realizing that the young woman had an unusual degree of psychic attainment, invited her to join her in the work of benefiting humanity in which she was herself engaged. The invitation was accepted, and soon the young woman became, unwittingly to herself, quite under the power of the spirits.

Still unconscious of the fact that they controlled her, she entered a well-known Bible school. There, under spiritual influences, she began to realize that something was wrong with her. She confided in the wife of one of the faculty, and it was not long until her condition became known. At once steps were taken for deliverance. Over a period of three months some thirty-three demons were expelled, and she was delivered.

Another instance was encountered in the early part of 1950; the subject being a woman of about thirty-five. In her early childhood she had been cared for by her grandmother, who was a devotee of Christian Science and who also was interested in a number of the heterodox cults which flood America. As the child learned to read – she had a very precocious mind – she was used by the grandmother to read to her their literature. In this way her mind was prepared to receive demon working. For it is a most serious and solemn fact that, just as the Word of God is charged with heavenly power, so the writings of these cults convey to their readers a power that is diabolic.

The woman was converted when nineteen years of age but did not go deeply into spiritual things for a number of years; in fact not until she had begun to attend a Bible school. Then she began to seriously follow the Lord and was baptized. After this event, the spirits began to seriously trouble her. She had begun to help in the kitchen of the school where she was attending; suddenly, while working, she fell unconscious to the floor. This occurred a second time, whereupon she was taken to the hospital room. There the school doctor visited her and, as her actions were somewhat violent, decided that it would be best to commit her to the state hospital. A student who was interested in her asked the doctor if he would allow the writer to first see her, which was granted. She was partly unconscious, and a challenge being given to the demon, the response came from her lips in a decided “No.” The demon was then commanded to name himself, to which he responded with the word “Cults.” When this was followed by casting out of the spirits, the first group that left her called themselves by the name of well-known cults, surprising some of those present. At intervals, groups of demons were expelled, the number totaling 171.

A third instance was that of a young man of twenty-two years of age. He had been very desirous of the gift of tongues. Though warned of the serious danger of concentrating on any gift, rather than on the Giver, he persisted in seeking with intensity. Finally he obtained what he sought. So confident was he that the experience was of the Lord that he considered he now had sufficient light to carry him forward without the Word of God; the personal revelation was all satisfying. Then came suddenly the understanding that his tongues were not genuine. The effect was a most bitter disillusionment. He came to the writer’s house, and while attempting to pray became unconscious. The test revealed the presence of demons, one of whom gave the name of “False Tongues.” Deliverance came after a somewhat protracted struggle, and he is now free in spirit and mind and body. He has learned to abide in the Lord and is recognized as a helper of others.

These three recent cases were marked by symptoms very similar in character. The spirits would take entire control of the personality of their victim, causing the sufferer to become entirely unconscious. So complete was the coma that the individual was quite unaware of anything that had happened during the period of the attack, which sometimes lasted for as long as eighteen hours. During this time, the demons would respond to a test, would give their names, would try to talk with those about, at times would use obscene language or would threaten the helpers. When victory was finally given, and the man or woman was freed, there would be a period of a few days, or even two or three weeks, when the effort would be made by the spirits to regain the ground lost. This could only be thwarted by the personal resistance of the one who had been delivered, holding against the enemy the name and the blood of Jesus Christ.

Sometimes the afflicted person seemed to be able to see the spirits that surrounded him or her. This is usually a proof of possession; however, it is not always the case, as some, while conscious of the presence about them of the spirits, are unable to see them visibly. We have known some who claimed that they could see spirits accompanying them along the way they went. Incidents of the appearance of dead friends, of spirit rapping, moving of tables and other objects are common phenomena. One woman, a preacher of the Assemblies of God, told of strange appearances in her home, where a number of spirits seemed to live, where serpents crawled on the floor and articles fell without apparent cause. When questioned as to who saw spirits, the reply was, “All our evangelists see them.”

Three instances have been mentioned which are characteristic of one class of demon possession. But there are frequent cases where individuals do not become unconscious and where the spirit cannot be contacted by the means spoken of. It has been found impossible at times to deal with these, the spirit apparently paying no attention to prayers or commands, and this over extended periods. The individuals in such cases often claim to be conscious of the presence within them of other personalities, who they can at times call by name. It is impossible to judge such persons, as to their willingness to be delivered; they usually express real concern over their condition and desire to be relieved.

Another class of sufferers is similar to the above in that the spirits do not render them unconscious. Their experience of the presence of the enemy is usually that of deep mental or physical depression. A young man would complain of manifestations to his mind; at another time, he felt terrible pressure on his head and ears; again uncontrollable jerking would take control of his body. A young woman suffered from fear, from manifestations, from a strong desire for psychiatry. These symptoms, apparently proceeding from demon power, were addressed as demons, called by name, and commanded to leave. There was no further trouble from these sources.