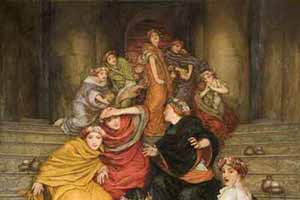 You know the story of Samson. He is known throughout all history. You mention the name Samson and you will hear that they know him as the strong man, the “Hercules” of the Bible. And here it says what Delilah did to him.

And she made Samson sleep upon her knees, and she called a man and caused him to shave off the seven braids of his head. Then she began to torment [Samson], and his strength went from him. She said, The Philistines are upon you, Samson! And he awoke out of his sleep and said, I will go out as I have time after time and shake myself free. For Samson did not know that the Lord had departed from him. Judges. 16:19-20 AMP

She finally kept on and on and on until she got him to sleep in her lap. The spirit of the world is constantly coming at us as the Church of the Living God. From every media to lull us to sleep. You can be taken into a spiritual stupor by just some of the things that are on the media today. You can become so taken up with them and your mind so filled with it that you never think of the things of God.

They are literally created to take all of this out of your mind, to put you to sleep. To lull you into indifference and carelessness. And all the while the Philistines are ready at a moment’s notice to pounce on you and attack. And when they attack, you will find that your spiritual strength is gone! And you wonder why you aren’t equal to the occasion.

The Bible is constantly telling us, “Leave the world system alone. Don’t let it lure you and attract you and alienate your affections from the things of God lest coming suddenly, He find us sleeping.”

As you know, Jonah was under a call of God to go to Nineveh to bring a message of judgment to those people and he did not want to go. So he got on a boat going in an opposite direction. When he got on the boat going to Tarsus, he was fleeing from the Presence of the Lord and it says, “There came a great storm on the sea.”

Then the mariners were afraid, and each man cried to his god; and they cast the goods that were in the ship into the sea to lighten it for them. But Jonah had gone down into the inner part of the ship and had lain down and was fast asleep. Jonah 1:5 AMP

So the captain came and said to him, What do you mean, you sleeper? Arise, call upon your God! Perhaps your God will give a thought to us so that we shall not perish. Jonah 1:6 AMP

So we are the only people who have the answer to the world’s ills. Yet many of us are down in the hold of the great ship of Zion. Even though we know the world is in turmoil, troubles like it has never seen, darkness covering the earth.

The Church of the Living God must awaken herself for God spoke to us and said, “Go into this. Emergency hours are coming on the world and I have very few people who will give themselves to this.”

The storms of life are on us! Even the Christians. Men and women who are in the limelight! Satan is attacking and if we do not watch our step and maintain our hold in God by prayer and the Word, many will be on the casualty list in this hour.

You see it’s so easy just to lie down and sleep in Zion. So easy! It’s so easy for all of us. But this is the hour when this salvation is going to be revealed. This is the hour of the revelation of Jesus Christ to His people.

We must refuse to be lulled to sleep by what we see taking place in the world today. There is something we can do about it. God has given us His Word, His authority, His power to change the world for we have the answer that they are looking for.

When we pray from our hearts by the Holy Spirit, we know that the perfect prayers are being prayed even though we may not mention specific things like the effects of the tsunami in Asia, the floods, Iraq, terrorism and so on. Psalm 37:5 tells us to commit our way to the Lord and the Amplified says to roll and repose each care of our load on Him. We can then trust Him and be confident that He will bring it to pass.