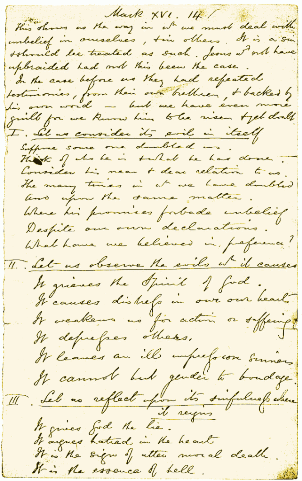 The following is a sermon outline from C. H. Spurgeon. The graphic is his handwritten notes. This shows us the way in which we must deal with unbelief in ourselves, and in others. It is a sin and should be treated as such. Jesus would not have upbraided had not this been the case.

In the case before us they had repeated testimonies from their own brethren, and backed by his own word-but we have even more guilt, for we know him to be risen and yet doubt.

Suppose someone doubted us.
Think of who he is and what he has done.
Consider his near and dear relation to us.
The many times in which we have doubted
And upon the same matter.
Where his promises forbade unbelief
Despite our own declarations.
What have we believers in preference?

2.    Let us observe the evils which it causes.

It grieves the Spirit of God.
It causes disbeliefs in our own hearts.
It weakens us for action or suffering.
It depresses others.
It leaves an ill impression [on] sinners.
It cannot but gender to bondage.

3.    Let us reflect upon its sinfulness where it reigns.

It gives God the lie.
It argues hatred in the heart.
It is the sign of utter moral death.
It is the essence of hell.