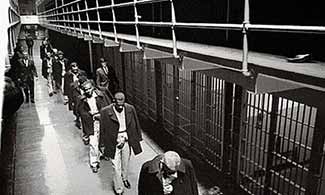 The Spirit of the Lord GOD is upon me, because the LORD has anointed me to bring good news to the poor; he has sent me to bind up the brokenhearted, to proclaim liberty to the captives, and the opening of the prison to those who are bound; to proclaim the year of the Lord’s favor, and the day of vengeance of our God; to comfort all who mourn; Isaiah 61:1, 2

“The Spirit of the Lord is with me. He has anointed me to tell the Good News to the poor. He has sent me to announce forgiveness to the prisoners of sin and the restoring of sight to the blind, to forgive those who have been shattered by sin, Luke 4:18 “The opening of the prison” is God’s own figurative illustration of our release or imprisonment to sin, and sickness and everything else that reached us through the Fall. It covers every phase of our redemption and salvation. What I have to say applies equally to every bondage known to man. If you are physically well, and your problem is one of the many others covered by redemption, then think of your problem as an open prison, and follow these instructions. You can thus keep God busy fulfilling His promise to you and you can live in the experience and enjoyment of your freedom.

What is meant by the opening of the prison? It means that the prisoners are free. Accordingly Moffatt so translates the text, “To tell prisoners they are free, to tell captives they are released.” Jesus opened the prison for us by bearing our punishment. “Jehovah hath caused to meet on him the punishment of us all” (Isaiah 53:6 Dr. Young’s translation). In Deuteronomy 28, all sickness is listed among the punishments which Galatians 3:13 tells us Christ redeemed us from. He, Himself, took our infirmities and bore our sickness. (Matt. 8:17.) Jesus paid our debt, and since it does not have to be paid twice, we are free.

How Are The Sick To Get Out Of Prison?

First, they must know that the prison door is open. Faith must have a divine act to rest upon. Accordingly Jesus said, “The Lord hath sent me to proclaim good tidings… to proclaim the opening of prison to them that are bound.” Jesus used this word “bound” when He said, “Ought not this woman whom Satan hath bound be loosed…?” Sickness is a bondage from which we have been redeemed. Jesus also said, “He hath sent me to set free the oppressed.” (Moffatt) All sickness is called “oppression of the devil.” (Acts 10:38.) The sick must have the “word of faith in their mouth and in their heart” before it can produce results.

Connected with “the word of faith” (each of God’s promises) is the proviso, “If thou shalt confess with thy mouth Jesus as Lord.” (Romans 10:8-10). The condition of our salvation is our confession and acceptance of His Lordship over us. Christ does not save those whom he cannot govern. “For to this end Christ both died and rose, and revived, that He might be Lord bot of the dead and the Living.” (Romans 14:9.) Until we gladly acknowledge His Lordship over us our priorities are wrong. We are not to seek our redemptive blessings selfishly that we may waste them on our pleasures. Because of this selfish motive James says to some, “Ye ask, and receive not, because ye ask amiss.”

After knowing that the prison is open, the first thing God requires of man is that he forsake his way and thoughts and accept God’s way and thoughts. (Isaiah 55:7.) Since the Fall the natural man is bound and imprisoned by his physical senses. These keep him looking to his symptoms instead of being occupied with the Word of God. The opening of the prison frees him from this bondage, making it possible to see and know beyond what the physical senses register. Man’s way is to judge by the walls of the prison instead of by the open door. True the walls are there, but the door is open.

Faith requires no evidence but the Word — it is blind to all but the Word of God. Paul says, “We look not at the things that are seen.” When we rely upon physical evidence we repudiate the Word and faith has no opportunity to exercise itself.

“Let him forsake his thoughts.” Man’s thoughts have been that the prison is locked and that, therefore, he is not free. He must forsake such thoughts and think the truth — the truth that the prison is open and therefore he is free to walk out. One man thinks that his disease will kill him, while the enlightened man knows that he can be healed. Both of these men have faith, but one has faith that his disease will kill him, while the other has faith in God’s promise to heal him. The sick man must “forsake” his way of judging according to the walls of the prison — by his symptoms — and he must accept God’s way of reckoning according to the open door.

As soon as it is believed it produces joy. Jesus says in this text, “He hath sent me to preach… the acceptable year of the Lord.” The Gospel Age was typified by the Old Testament year of Jubilee. (Heb. A time of shouting.) It was a happy year because God said on the day of Atonement (in this 50th year) “Ye shall return every man to his possessions.” Just so the Gospel Age is a “time of rejoicing” over the restoration of all our lost possessions through the fall: Health for soul and body and every other blessing included in our redemption.

God’s promises, when truly believed, become the rejoicing of our heart before they are fulfilled to us (Jer. 15:16.) A pardon from the governor read to a man siting in an electric chair to be electrocuted would make him happier before he gets out of the chair than he will be a month later. Believing and rejoicing that we are free precedes our first stage out of prison or bondage to sickness. The absence of rejoicing would prove that you do not really believe the proclamation that you are free.

The sick person must forsake the thought that his freedom is a future act. It is not a future act, it is a past act. Your use of your freedom may be a future act, but it should not be. The door to your prison has been open a long time. “By His stripes ye were healed.” Calvary was your “emancipation proclamation” from everything outside the will of God. The “Emancipation Proclamation” by Abraham Lincoln made the slaves of the South free before they knew it. But they did not use their freedom until they were informed of it. Then they did not judge according to their surroundings, but by the proclamation.

Your Part In Receiving Healing

The sick person must believe he is free because of the open prison door and then act accordingly. Unless faith has corresponding actions, God’s Word says that it is as dead as a body without a spirit. “The opening of the prison” has made you free but you will be in prison until you rejoice and walk out. No one else can do your part for you. I cannot pray you out of prison without your cooperation. Jesus required action on the part of the sick to be healed. He commanded the palsied man himself, not the four that brought him, to take up his bed and go home. He commanded the ten lepers to go and show themselves to the priest before their healing was manifested. Jesus commanded the blind man [to go and wash in the pool of Siloam. He commanded the man] with the withered hand to stretch it forth, etc., etc.

Even in the Old Testament times Jonah sacrificed with a voice of thanksgiving calling his prison walls “lying vanities,” not after, but before he got out. Naaman was required to dip in the Jordan seven times before his leprosy was cleansed. Even Christ Himself, after preaching the message of our text, “could do no miracle in Nazareth” because of their unbelief. Though Divine, He could not do their part.

If you were in prison, longing to get out, and the warden, pointing to an open door, should say to you, “Look,” “that door is open for you,” would you rejoice? Would you lay on your bunk and wait for the warden to carry you out? Would you ask your friends to pray you out after they have already prayed for your pardon and release? Your friends could come in and walk out with you, but not for you. Fix your eyes on the open door and keep on rejoicing and walking, and the walls of your prison will soon be behind you — the manifestation of your healing will become history.