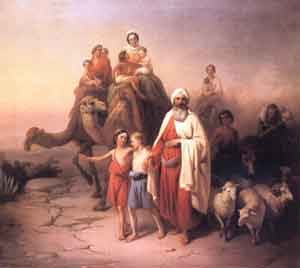 Abraham chose the faith way of salvation rather than depend upon personal merit and good works – he simply believed God. And well might Abraham have depended upon his good works, from a purely human standpoint. Excavations in the city of Ur where Abraham lived reveal the fact that Abraham was not a wild desert sheik, but an educated, wealthy, sophisticated citizen of the world. He was a man living in and partaking of a state of culture and opulence barely realized by those of us who are unfamiliar with the ancient civilizations of the past. His home in Ur would have had whitewashed rooms, indoor plumbing, and many luxury items made out of precious woods and metals.

And Abraham was no ignoramus with a gullible faith. With all his cultural background, and in spite of it, he saw that much of that with which we have to do, is taken upon faith, including the way of salvation. Those who exercise a like faith of Abraham, share with him in the same salvation, which he received from God.

So that those who are believing ones are being blessed in company with believing Abraham. Galatians 3:9 Wuest

Abraham had much for which to boast. Just like Paul (wealthy, educated, Roman citizen, and Pharisee) and Moses (wealthy, educated, and raised as a Pharaoh’s son), he could have stood upon his own authority and personal standing. Instead, he stood solely upon the authority and faithfulness of God. They gave it all up and did not look back, but looked only to God. They were able to go well beyond their own abilities because they did not look to their own abilities.