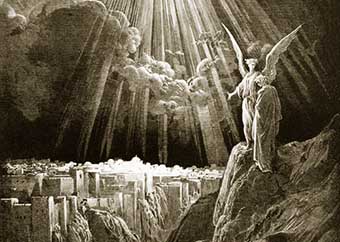 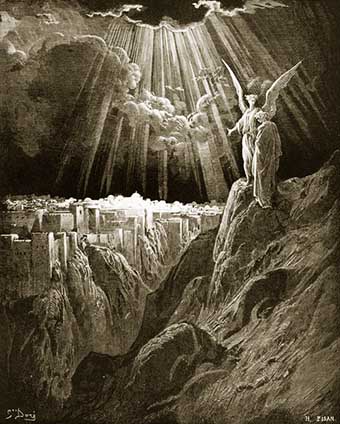 To help you visualize, here are two Bible passages about our new Heavenly City:

However, don’t be happy that evil spirits obey you. Be happy that your names are written in heaven.” Luke 10:20 God’s Word Translation

And he carried me off in [my] spirit to a mountain, great and lofty, and showed me the holy city, Jerusalem, coming down out of heaven from God, 11 having the glory of God. Its splendor and radiance as a luminary, a light-giving body, was like a stone which is most precious, like a stone of crystal-clear jasper, 12 having a wall, great and high, having twelve large gates, and at the gates twelve angels, and names written upon them which are the names of the twelve sons of Israel; 13 on the east three gates, on the north three gates, on the south three gates, and on the west three gates. 14 And the wall of the city has twelve foundations, and upon them twelve names of the twelve apostles of the Lamb. 15 And he who is speaking with me was having as a measuring instrument a golden reed, in order that he might measure the city and its gates and its wall. 16 And the city is laid out in the form of a square, and its length is equal to the breadth. And he measured the city with the reed, fifteen hundred miles [on each side]. Its length and breadth and height are equal. 17 And he measured its wall, two hundred and sixteen feet [in height], using the measuring system of mankind, which was that used by the angel. 18 And the material of which its wall was composed was jasper. And the city was pure gold like clear crystal. 19 The foundations of the wall of the city have been adorned with every kind of precious stone. The first foundation was jasper, the second sapphire, the third a chalcedony, the fourth an emerald, 20 the fifth sardonyx, the sixth sardius, the seventh chrysolite, the eighth beryl, the ninth a topaz, the tenth a chrysoprasus, the eleventh a jacinth, the twelfth an amethyst. 21 And the twelve gates were twelve pearls. Each one of the several gates was one pearl. And the broad avenue of the city was pure gold like transparent glass. 22 And an inner sanctuary I did not see in it, for the Lord God, the Omnipotent, is its inner sanctuary, and the Lamb. 23 And the city has no need of the sun nor of the moon to illuminate it, for the glory of God illuminated it, and its lamp is the Lamb. 24 And the nations shall walk by means of its light. And the kings of the earth bring their glory into it. 25 And its gates shall by no means be locked during the day, for night shall not be there. 26 And they shall bring the glory and the honor of the nations into it. 27 And there shall positively not enter it anything unclean and he who makes an abomination and a lie, except those written in the scroll of the life of the Lamb. 22:1 And he showed me a river of water of life, sparkling like crystal, proceeding out of the throne of God and of the Lamb. 2 In the midst of its [the city’s] broad avenue and on this side and on that side of the river was a tree of life bearing twelve fruits, yielding its fruit each month. And the leaves of the tree were for the health of the nations. 3 And every curse shall exist no longer. And the throne of God and of the Lamb shall be in it. And His bondslaves shall render Him sacred service. 4 And they shall see His face. And His Name shall be on their foreheads. 5 And there shall be night no longer. And they do not have need of the light of a lamp nor of the sun because the Lord God shall shed light upon them. And they shall reign as kings forever and forever. Revelation 21:10 – 22:5 Wuest Expanded Translation

And they shall reign as kings forever and forever.