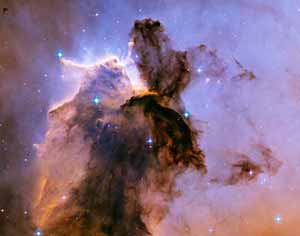 Look around you. Can you see God? If you can’t, and I’m assuming you can’t, why do you think that is? Is it because He doesn’t exist?

Rest assured; God does exist. He hides Himself so that we will make life’s decisions not based on His overpowering presence, but rather, of our own free will. In short, life is a test. A test of how we will act if we are left seemingly on our own, with no obvious eternal character to coerce us. His residual felt presence being the written word of God and the ever so subtle work of the Holy Spirit. Both of which can be ignored. The obvious God has made Himself not so obvious so that He can observe our actions. He is all around us, and in us; you just can’t see Him. He only seems far away and detached.

So He said, “A nobleman went to a distant country to receive a kingdom for himself, and then return. (13) “And he called ten of his slaves, and gave them ten coins and said to them, ‘Do business with this until I come back.’ Luke 19:12, 13

And He began to tell the people this parable: “A man planted a vineyard and rented it out to vine-growers, and went on a journey for a long time. Luke 20:9

You alone know when I sit down and when I get up. You read my thoughts from far away. Psalm 139:2 God’s Word Version

Recently I had a long conversation about God with a wonderful Hindu man. He had read the Gospels and was clearly impressed with the words of Jesus in the Sermon on the Mount. In the discussion we touched on the reason and meaning of life. During the conversation, he made this powerful statement:

“The universe is too great and there are too many people in this world for me to believe that I am important enough for anyone, let alone God, to care about me. God cannot possibly care about something or someone as insignificant as me.”

God created this universe, and all the people that have ever been in it, as an elaborate backdrop, one in which we, on a daily basis, are forced to make decisions concerning Him. The reason the universe is so seemingly infinite is so that you will not know (except by faith) that you are actually in God’s sphere, His ‘stage set,’ if you will. Shakespeare once said, “All the world’s a stage, and all the men and women merely players…” There may be billions of people alive today, but there are only two individuals that really matter – God and you.

“I call heaven and earth to witness against you today, that I have set before you life and death, the blessing and the curse. So choose life in order that you may live, you and your descendants, (20) by loving the LORD your God, by obeying His voice, and by holding fast to Him; for this is your life and the length of your days….” Deuteronomy 30:19, 20a

This world is big enough that, if we choose to, we could live life without God altogether. However, someday all of us will stand before Him face-to-face, and He will give us a full appraisal of our lives – all actions, thoughts, and words. Upon this appraisal, stands the quality of our eternity. The Bible says that only those, who believe on His Son and obey His commands, will live with Him in eternity, “world(s) without end.”

“For we must all appear before the judgment seat of Christ, so that each one may be recompensed for his deeds in the body, according to what he has done, whether good or bad. II Corinthians 5:10

We become insignificant when we contrast our lives against the vastness of the universe and the incredible number of people living today. Christians must not think like this. Rather, we should view the scale of creation as a measure to which God has gone to provide a suitable environment for us. One in which each of us is able, if we so choose, to develop a relationship with Him. Its scale gives plenty of opportunity for the use of faith now, and provides plenty of room to grow for eternity. We are told that eternity holds worlds and universes far greater in both size and grandeur. Wow, please serve Him with all your heart.

“Unto him be glory in the church by Christ Jesus throughout all ages, world without end. Amen.” Ephesians 3:21 (King James Version)

Let us live this life in anticipation of the next.

See also: Jesus Said, “Bang!” and God’s Salvation Deal and Everyone Dies, Everyone and Intra Muros