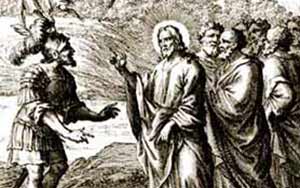 You don’t need a religious background to have great faith. Many times, it is the neophyte that does the best job of believing. The Centurion mentioned in Matthew’s Gospel (Matthew 8:5-13) didn’t grow up in a religious home, and knew little of the things of the Temple. He came from the hard unforgiving world of military men and war. What was it about his approach that impressed Jesus? What impressed Him was this very lack of a religious mentality. It was easy for him to approach God because he wasn’t blinded by religious thought. He wasn’t approaching a religion; he was approaching a man of great authority.

War is hell, but it does have constructive qualities. War has a way of realigning your priorities and stripping off all that is unnecessary. Circumstances take on a different reality when people start dying around you, and decisions take on new meaning when they involve critical situations. There is a certain clarity that comes over a person during these times. Important things once again become important, and the option to do things ‘just because’ is simply no longer an option.

The Centurion’s beloved servant was in a life and death struggle and there was no time to play games. His condition called for immediate action. There was only one person he could go to for help, God Himself, and he was determined to go there, with honesty, and honor, and with a deep-seated understanding of the principles of authority.

The Centurion might not have been skilled in the ways of the church but he was well versed in the ways of obedience and authority. He humbly and courageously put this knowledge to good use, to the point that Jesus Himself would stop, marvel, and make public note of it. Religious theatrics and a large Christian vocabulary won’t move God. Only faith moves the hand of God, and great faith moves it and leaves a lasting impression. Great faith is recognizing God’s authority and trusting only in His spoken word. All you need to do is hear Him and obey. Yes Sir!