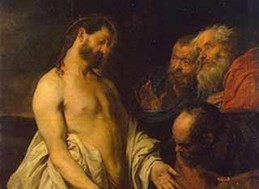 But Jesus said unto them, A prophet is not without honor, but in his own country, and among his own kin, and in his own house. And he could there do no mighty work, save that he laid his hands upon a few sick folk, and healed them. And he marveled because of their unbelief. And he went round about the villages, teaching. Mark 6:4-6

The text says in verse 5 that because of their unbelief Jesus ‘could’ do no miracles. It did not say that He ‘would’ not do miracles, but that He ‘could’ not do miracles. It appears that Jesus did not have a choice in the matter. That is astonishing, and other translations back it up. This means that our unbelief may be able to withstand the love and power of God. It seems that we are far more powerful than we might have thought, but in a negative way. Unbelief is an awesome spiritual force.

In a way, we are able through unbelief of withstanding God. It may not sound like good theology but it is a hard spiritual reality. After all arguments are said and done, and when the rubber firmly hits the road in your walk with God – either you believe Him or you don’t. You either believe Him and He is allowed to operate in your life, or you do not believe Him and He is not able. One might chafe at the use of the word ‘allow’ in this case, but God stated it in just this way in His word. He will act accordingly. He can’t honor unbelief because He has predetermined that He won’t honor unbelief. Look at what Pastor James says:

Unbelief is an awesome spiritual force.

It says that Jesus ‘marveled at their unbelief’. Jesus also ‘marveled’ (same Greek word) at the great faith of the Centurion in Matthew 8:10. The Centurion saw Jesus as a Man of ultimate authority and he gave Him the respect He deserved. He trusted His word only, requiring nothing else. He knew that He was able to perform what he needed. The people of Nazareth did not honor Him, and they looked upon Him as a mere natural man. Guess who brought glory to God. Guess who got what they came for. Respect Him, honor Him, and plant His word deep in your heart, so that you can have a strong belief in Him. Go out and make Jesus marvel. See Also – Who Can Withstand God’s Power?