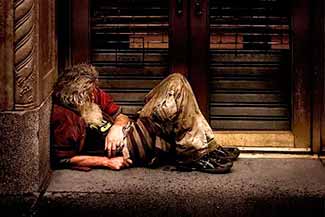 There is much in the Bible about helping the poor. Showing mercy to the poor is a moral imperative. Oppressing the poor is a sin. However, New Testament compassion for the poor should not be used as a tool to force those who have obediently worked and sown to give similar rewards to those who have not worked and have not sown. Look at the following passage from the Gospel of Luke. Here, the Lord actually demonstrates this point. He took from the poor individual, and rewarded the successful one.

He said, “A prince went to a distant country to be appointed king, and then he returned. [Before he left,] he called ten of his servants and gave them ten coins. He said to his servants, ‘Invest this money until I come back.’ “The citizens of his own country hated him. They sent representatives to follow him and say [to the person who was going to appoint him], ‘We don’t want this man to be our king.’ “After he was appointed king, he came back. Then he said, ‘Call those servants to whom I gave money. I want to know how much each one has made by investing.’ “The first servant said, ‘Sir, the coin you gave me has earned ten times as much.’ “The king said to him, ‘Good job! You’re a good servant. You proved that you could be trusted with a little money. Take charge of ten cities.’ “The second servant said, ‘The coin you gave me, sir, has made five times as much.’ “The king said to this servant, ‘You take charge of five cities.’ “Then the other servant said, ‘Sir, look! Here’s your coin. I’ve kept it in a cloth for safekeeping because I was afraid of you. You’re a tough person to get along with. You take what isn’t yours and harvest grain you haven’t planted.’ “The king said to him, ‘I’ll judge you by what you’ve said, you evil servant! You knew that I was a tough person to get along with. You knew that I take what isn’t mine and harvest grain I haven’t planted. Then why didn’t you put my money in the bank? When I came back, I could have collected it with interest.’ The king told his men, ‘Take his coin away, and give it to the man who has ten.’ “They replied, ‘Sir, he already has ten coins.’ ” ‘I can guarantee that everyone who has something will be given more. But everything will be taken away from those who don’t have much. Bring my enemies, who didn’t want me to be their king. Kill them in front of me.'” Luke 19:12-27 God’s Word Translation

Socialism and Christianity are not compatible. Personal responsibility in obeying God’s word is essential to receiving God’s blessing. To create a system that diminishes the impact of God’s blessing, and compensates another for a lack of blessing is simply not Bible. This is not the economic system of the Kingdom of God. Christianity is equality of opportunity. Socialism is equality of result. Giving ‘as a right’ that which is not deserved is not mercy and is not moral. It is not love either, for either individual. Having tender mercies and helping the poor should not be confused with enabling the poor.

Jesus – ‘Take his coin away, and give it to the man who has ten.’

Those who over emphasize God’s love become soft and overly inclusive. Those who over emphasize God’s justice become harsh, demanding, and religious. It is vitally important that we understand both aspects of God’s character. One cannot be fully understood without understanding the other. Again, as we have said before, God gives according to His love, but we receive according to our faith. In this, the love and the justice of God are satisfied and demonstrated. Love desires what is best for the individual. Justice demands what is right for all. God certainly has a loving heart, but He also has a certain expectation of man. The final desire of His love will not be demonstrated until that expectation has been satisfied.