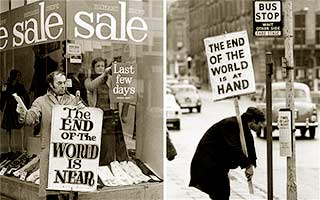 Whatever you are hoping for in the United States Presidential election, if it does not happen, it will not be the end of the world. I know it may seem like it will. The end will come a little later.

The end of the world will come when:

And the Good News about the Kingdom will be preached throughout the whole world, so that all nations will hear it; and then the end will come. Matthew 24:14

The end of this age will come when:

Then the end will come, when he hands over the kingdom to God the Father after he has destroyed all dominion, authority and power. 1 Corinthians 15:24

The end feels like it is getting very close. It is of course later than it has ever been, but it is not yet. Sir Winston Churchill once said, “Now this is not the end. It is not even the beginning of the end. But it is, perhaps, the end of the beginning”. So true; the transition is just beginning. The days ahead are going to be a wild ride no matter who is elected President. So, raise your hands high into the air, keep your eyes on Jesus, and enjoy the ride. We are about to go over the top.

Everything will be good in the end. So, if it is not good yet, then it is not the end yet.