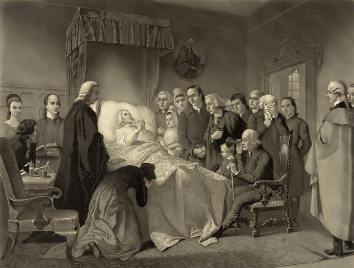 In 1729, while John Wesley was a student at Oxford, he started a club with his brother Charles. It was soon mockingly dubbed “The Holy Club” by some of his fellow collegians. The club members rigorously self-examined themselves everyday by asking the following 22 questions: 1. Am I consciously or unconsciously creating the impression that I am better than I really am? In other words, am I a hypocrite?

2. Am I honest in all my acts and words, or do I exaggerate?

3. Do I confidentially pass on to others what has been said to me in confidence?

5. Am I a slave to dress, friends, work or habits?

6. Am I self-conscious, self-pitying, or self-justifying?

7. Did the Bible live in me today?

8. Do I give the Bible time to speak to me every day?

9. Am I enjoying prayer?

10. When did I last speak to someone else of my faith?

14. Do I insist upon doing something about which my conscience is uneasy?

16. Am I jealous, impure, critical, irritable, touchy or distrustful?

19. Do I thank God that I am not as other people, especially as the Pharisees who despised the publican?

20. Is there anyone whom I fear, dislike, disown, criticize, hold a resentment toward or disregard? If so, what am I doing about it?

21. Do I grumble or complain constantly?

“Encourage one another daily . . . so that none of you may be hardened by sin’s deceitfulness.” Hebrews 3:13

The first list appeared about 1729 or 1730 in the preface to Wesley’s second Oxford Diary. Similar questions appeared in his 1733 A Collection of Forms of Prayer for Every Day in the Week. As late as 1781, Wesley published a list of questions like this in the Arminian Magazine.

The Holy Club never exceeded twenty-five members, but many of those made significant contributions, in addition to those of Charles and John Wesley. John Gambold later became a Moravian bishop. John Clayton became a distinguished Anglican churchman. James Hervey became a noted religious writer. Benjamin Ingham became a Yorkshire evangelist. Thomas Brougham became secretary of the SPCK. George Whitefield, who joined the club just before the Wesleys departed for Georgia, was associated both with the Great Awakening in America and the Evangelical Revival in England. Looking back from 1781 John Wesley saw in the Holy Club the “first rise” of Methodism. The “second rise” was in Georgia in 1736, when he met with selected members of his congregation on Sunday afternoons. From these grew the idea for “Methodist societies” which became the backbone of the Methodist organization. (http://www.ctlibrary.com/)