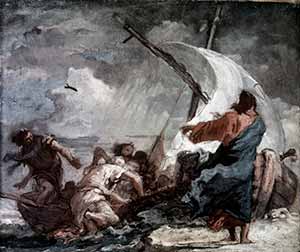 Faith must be followed with actions that are consistent with what is believed. Faith is the noun form and believe is the verb form of the same Greek word. Faith is the ability to believe, but that ability must be used and acted upon for faith to come alive and work. Believing is the action side of faith – believing is ‘acting in faith.’ Just having faith is not enough. Having the ability to believe is not enough. One must act on that ability by acting consistent with what is believed. James tells us that faith without corresponding actions is lifeless and dead.

In the same way, faith by itself, if it is not accompanied by (corresponding) action, is dead. James 2:17 NIV

A better word for ‘dead’ in the verse above might be ‘dormant,’ ‘unproductive,’ or ‘inoperative.’ Actions are needed bring faith to life. See how these corresponding actions were needed to make their faith come alive and be productive:

TO THE PALSIED MAN CHRIST GAVE THIS COMMAND – But that ye may know that the Son of man hath power upon earth to forgive sins, I say unto you, Arise, and take up your couch, and go into your house. Luke 5:24.

TO THE WOMAN WITH AN ISSUE OF BLOOD – Who touched me? Somebody hath touched me: for I perceive that virtue is gone out of me. Luke 8:45-46. (her corresponding action was touching the hem of His garment)

TO THE TEN LEPERS – Go show yourselves unto the priests. Luke 17:14.

Peter received faith to walk on the water when he heard Jesus say, ‘Come.’ But that faith did not come alive until he threw his leg over the side of the boat and started walking. Actions unlock the power resident in faith.

Find and study the promises in the Bible that cover your need. Give yourself to them wholly, and meditate on them until they get deep down inside of you. Spend time with God and listen to Him. Do what He says and make the changes that He requires. Hearing His voice produces faith and obedience to what He says produces the victory.

Faith comes by hearing and hearing by the (spoken) word of Christ. Romans 10:17

Therefore, take courage, men, because I believe God that it will be just the way it was told to me. Acts 27:25 Holman Christian Standard Bible