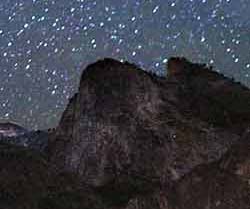 Look out at the stars above, and search them if you will. You will not find God in them, for He is not found in creation. The universe was created to obscure His presence, not to express it. To the world He is distant and hidden, yet within the heart of man He can be near and personal.

Reason and logic cannot fathom Him. The intellect cannot know Him. Doubt and skepticism further obscure Him. Only faith can reach Him. He is hidden from everyone except those that already know He is there. He is not lost yet He can only be found by those who diligently seek Him.

He only approaches the humble. He only feeds the hungry. He only speaks to those who long for His voice. He will not reveal Himself to those who require evidence. The obvious God is only obvious to those that believe that He exists. He may be far from the eyes but He is close to the heart.