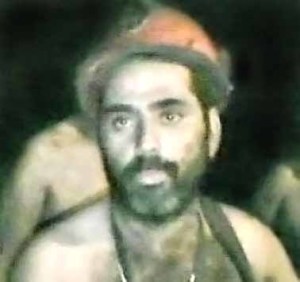 “We then all believed we would be saved. The Devil was down there and so was God. I didn’t see either but I felt both. They were in a battle for our souls. And God won.” and “We were swallowed into the bowels of hell, but we have been reborn, and now I feel it is my duty to tell what went on and the lessons to be learned.” Chilean miner Mario Sepulveda

“I just thought about dying,” he said. Everything in our walk comes down to a battle between life and death, light and dark, and good and evil – God and the Devil. We can’t fully see either one but we can feel them both. Whether at the dark bottom of a Chilean mine, or in the deepest darkest recesses of our own heart, we know they are there; the One helping and the other hurting. Mario Sepulveda gets it because he’s literally been there.

And his ending exhortation to one of his interviewers says it all – “Don’t worry so much about money. Live your life. Live every second of it.” – sounds like the Wisdom of Solomon.

God and the Devil – We can’t see them but we know they are there.