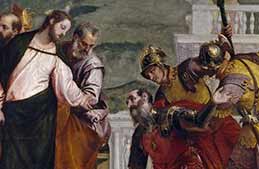 “Lord, I am not worthy that you should come under my roof: but only say the word, and my servant shall be healed. ” Matt. 8: 8.

The faith of which these words are the utterance was so great that the Lord wondered at it, and exclaimed: “I have not found so great faith, no not in Israel.” It may be of service to those who desire to come to faith, or who long for a stronger faith than they have hitherto had, to examine carefully the faith of the centurion, and to observe the soil in which that great faith struck its roots. The soil is — deep humility. This man who, although he belonged to the Gentiles, was praised by the Jewish elders as worthy of the Lord’s favor, and whose faith surpassed all that the Lord had found in Israel, — this eminent man is the only one of whom we read, during Jesus’ sojourn on earth, that he did not consider himself worthy that Jesus should enter his house. Wonderful humility in such a hero of faith. We learn from this the most momentous lesson — that deep humility and strong faith are knit to one another by the closest bonds.

“I have not found so great faith, no not in Israel.”- Jesus

Out of humility springs faith. Then first, when the soul fully acknowledges that it has nothing, and is also content to receive favor as one that possesses nothing, does it cast itself on the free grace of God, and receive it as one that believes. In the acknowledgment of its nothingness, it does not dare to contradict God with its thoughts of unworthiness, with its desire still further to bring this or that to perfection. It feels that, since it has pleased such a great God to say that He is prepared to show compassion to the poorest and most wretched, then nothing becomes it better than to be silent and suffer Him to manifest His love. It knows, moreover, that it is so deeply corrupt that it can never of itself become better, and on this account its faith is just the best proof of its humility: it is from the recognition of its utter helplessness, from its knowledge of the fact that it can never become better, that it casts itself on the will of God.

This is an entirely different state of mind from that of all such as imagine that humility comes out in not believing; as if there could be humility in waiting till something has been found in us that could make us more acceptable to the Lord than we really are; as if there could be humility in giving no obedience to the command of God actually to believe. Nay, verily. And just as perverse is the idea that faith will at any later period lead to pride. No: faith, as it springs from humility, will in turn only increase humility. It was because the centurion by faith recognized Jesus as wielding over nature a power which could not by any circumstance be prevented from healing the sick by His mere word, that he felt himself to be unworthy of having him in his house. And thus will it always be.

The more glorious the revelation and experience of the Lord’s greatness and goodness which faith enjoys, the more deeply does it sink in self-abasement and in lowly acknowledgment of the condescension by which such a God unveils Himself to such a sinner.

Out of humility springs faith.

And thus it always continues to be: the deeper humility the more faith, and again, the stronger faith the deeper humility. May the Lord teach us these truths — that there is no stronger proof of humility, and also no better means of increasing it, than just faith; and that, whether we feel ourselves deeply humbled, or still desire to come to a deeper humility the one as well as the other should only shut us up to faith.

And now, soul, why do you not believe! Are you still too unworthy? You dare not say so. The deeper your humility, the stronger your reason and right for believing. Are you still too proud? Ah, let it not be longer so. Only bring yourself to the acknowledgment of your entire weakness, and confess that you are wholly lost: in the depths of your wretchedness, you will see that there is no other remedy than to let the Lord help you, and to commit yourself trustfully to the word of His grace.