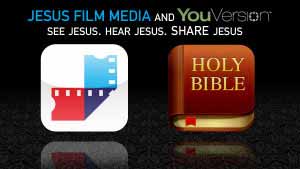 How do you teach illiterate native people about the Christ of the Bible? People who don’t know the first thing about Jesus – who He was, what He did, and what He means to us today. For example, how do you take a person from the jungles of South America and teach to them the story of the Christian Bible? They know nothing of temples, Pharisees, and the crucifixion. They have no basis from which to understand the passages in the New Testament. We face this problem all over the world, but there is an answer. They can be introduced to the context and culture of the Bible when they see The Jesus Film. Not only is The Jesus Film a great evangelistic tool, it is also a great teaching and discipleship tool. It can go a long way to resolving and answering the issues and questions stated above.

They will learn about God creating the world, how Adam and Eve sinned, the foretelling of Jesus in the Old Testament, and the Gospel Story of Christ and the Cross. They will see with their own eyes temples, priests, the Roman Empire, Gospel miracles, and the Resurrection of Christ. And they will hear Jesus talk to them  in their own language.

The Jesus Film is a big really deal. Since 1979, when it was first filmed (it has recently been updated and improved), it has been shown over six billion times worldwide and is now available in over 1,100 languages. It is responsible for over 200 million decisions to accept Christ. Let me say that again – It is responsible for over 200,000,000 new Christians on this earth. And now it can be used by anybody with no permissions necessary. I am going to use it when I go back to the wonderful native people of the Amazon region. I cannot wait. I want to see their faces when they see the face of the Christ talking to them. Watch them cry, as they all do, when He is crucified, and then jump for joy at His resurrection.

Watch a clip of it here for yourself. Learn from it and teach from it. There is incredible power released when native people hear the story of Jesus in their own language. Download the full film – here. Download clips of the film – here.