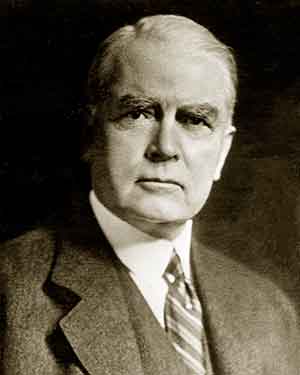 John Raleigh Mott’s (1865 – 1955) intense evangelistic passion made him his generation’s most popular evangelist to university students and a tireless promoter of world missions.

“The evangelization of the world in this generation” —John R. Mott

Mott’s destiny, however, lay not in foreign missions but in evangelizing college students and inspiring others to foreign mission work. He became college secretary of the YMCA in 1888, when the organization was consciously evangelical and aggressively evangelistic. That same year, he helped organize the Student Volunteer Movement for Foreign Missions, a branch of the YMCA and YWCA. By the 1950’s, over 20,000 volunteers had gone to mission fields through its efforts.

Mott and a colleague were offered free passage on the Titanic in 1912 by a White Star Line official who was interested in their work, but they declined and took the more humble liner the SS Lapland. According to a biography by C. Howard Hopkins, upon arriving in New York and hearing of the Titanic’s sinking, the two men looked at each other and remarked that, “The Good Lord must have more work for us to do.”

By the time Mott was 32, he was called “Protestantism’s leading statesman,” at 58, the “father of the young people of the world,” and at age 81, in 1946, he was awarded the Nobel Peace Prize.

In an era when liberals and fundamentalists debated fiercely, Mott took a middle view: “Evangelism without social work is deficient; social work without evangelism is impotent.”

Still, evangelism was his first love. The title of his bestselling 1900 book is The Evangelization of the World in this Generation, and in his last public appearance, he said, “While life lasts, I am an evangelist.”

His books: The Evangelization of the World in this Generation – 1900, The Present World Situation – 1914, The Pastor and Modern Missions– 1904, The Vision of the Student Missionary Pioneers – 1910