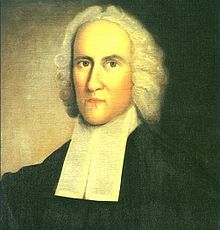 American Puritan theologian and philosopher (1703-1758) – Edwards was born in East Windsor, Connecticut, to Timothy Edwards, pastor of East Windsor, and Esther Edwards. The only son in a family of eleven children, he entered Yale in September, 1716 when he was not yet thirteen and graduated four years later (1720) as valedictorian. He received his Masters three years later.

In 1727, at the young age of 23, he became Pastor of one of the largest and wealthiest congregations in the colony. Throughout his time in Northampton his preaching brought remarkable religious revivals. Jonathan Edwards was a key figure in what has come to be called the First Great Awakening of the 1730s and 1740s. Edwards moved to Stockbridge, Massachusetts, then a frontier settlement, where he ministered to a small congregation and served as missionary to the Housatonic Indians. There, having more time for study and writing, he completed his celebrated work, The Freedom of the Will (1754).

Edwards was elected president of the College of New Jersey (later Princeton University) in early 1758. On March 22, 1758, he died of fever at the age of fifty-four following experimental inoculation for smallpox and was buried in the President’s Lot in the Princeton cemetery beside his son-in-law, Aaron Burr.

Go to our Online Books page and scroll down to the Jonathon Edwards section for access to a full list of his works.