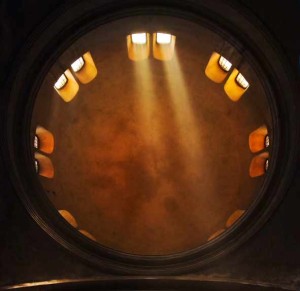 In introducing the theme of Romans, Paul uses gar, “For.” Vincent says, “Marking the transition from the introduction to the treatise, ‘I am ready to preach at Rome, for, though I might seem to be deterred by the contempt in which the gospel is held, and by the prospect of my own humiliation as its preacher, I am not ashamed of it.” Alford comments, “Yea, to you at Rome also, for though your city may be mistress of the world, though your emperors may be worshipped as deities, though you may be elated by your pomps and luxuries and victories, yet I am not ashamed of the apparently mean origin of the gospel I preach.”

And then he gives the reason why he is not ashamed of it. Coming to the city where power is the keynote, the power of the Roman Empire, its military might, the apostle says that the good news he brings is “the power of God unto salvation.” Of the six words for “power” in the Greek language, Paul chooses dunamis to describe the effectual working of the good news of salvation. Dunamis is power, natural ability, inherent power residing in a thing by virtue of its nature, or, power which a person or thing exerts or puts forth. The gospel is the inherent, omnipotent power of God operating in the salvation of a lost soul that accepts it. “Unto” is eis, a preposition often signifying result. The gospel is God’s power resulting in salvation to the one who believes. The definite article is absent before “power,” “The gospel is a power of God.” Denney says, “It does no injustice to render a’ divine power. ‘The conception of the gospel as a force pervades the epistles to the Corinthians; its proof, so to speak, is dynamical, not logical. It is demonstrated, not by argument, but by what it does; and looking to what it can do, Paul is proud to preach it anywhere.” Vincent says that the gospel is “not merely a powerful means in God’s hands, but in itself a divine energy.” It is the good news of salvation energized by the Holy Spirit. Our word “dynamite” is the transliteration of this Greek word but not its translation. Dunamis does not refer to an explosive powder. The Greeks knew nothing about gunpowder. The gospel is not the dynamite of God. It is a sweet and loving message of mercy and grace which the Holy Spirit in sovereign grace makes operative in the heart of the sinner elected to salvation before the foundation of the universe.

Paul says, “For I am not ashamed of the good news, for a power of God it is resulting in salvation to everyone who believes, not only to the Jew first but also to the Gentile.” Paul wrote this letter before he had, after Israel’s repeated rejection of the good news, pronounced the fateful words, “Be it known therefore unto you, that the salvation of God is sent unto the Gentiles, and that they will hear it” (Acts 28:28). Until then, the apostle had given the Jew the priority in the hearing of the Word of God, but with that decision, the Jew was put on the same footing as the Gentile.

The gospel is God’s power resulting in salvation to the one who believes.