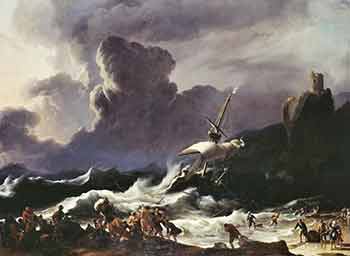 Everyone goes through shipwrecks. They happen to all of us. A shipwreck is like a slow motion crash. You see it coming. You brace yourself, hit the object, and there you go. What are you supposed to do? How do you make it out in one piece? Let us look at the Apostle Paul and his shipwreck of Acts chapter 27.

We pick up the story in Acts 27:1. Paul is ordered to appear before Caesar and is forced to go by ship to Rome late in the season. He knows it’s dangerous and he warns them, but they sail anyway. This shows us that you do not need to be the one causing the shipwreck to be caught in one. All 276 people on board, including the Apostle Paul, were affected. The shipwreck ends safely for all in Acts 27:44.

During the worst of the storm, Paul draws aside and seeks God on behalf of everybody on board. An angel of God appears to him and tells him, ‘Do not be afraid, Paul; you must stand before Caesar; and behold, God has granted you all those who are sailing with you.’ – Acts 27:24 He now knows that the ship will be lost, but they will be saved. Paul believes and proclaims to all on board the following statement of faith, ‘Therefore, keep up your courage men, for I believe God that it will turn out exactly as I have been told.’ Acts 27:25

Fortunately, they listened to him, followed his directions, and made it safely to shore. Let us now look at the things Paul did in preparation for the coming shipwreck:

1. He knew that God had the answer so he sought Him for it. He found a place in the midst of that violent situation to get quiet and hear from God, and he stayed there until he heard from Him. He did not focus on the problem, but rather, he focused on getting the answer from God. He knew that God was good, and that He was a rewarder of those that diligently seek Him (Hebrews 11:6).

2. He believed what he had heard. He then boldly spoke it out to all on board. Romans 10:17 says that, ‘…faith comes by hearing and hearing by the (spoken) word of God.” He was able to believe because he had heard God speak His will directly to him. He also encouraged others to join him in believing God.

3. He acted consistent with what God had said. Situations arose where people started to act contrary to God’s instructions and he stepped in to stop it. He walked the situation out to victory, with his eye on the goal of God’s promised end.

The crucial part was drawing aside and making himself hear from God. If he had not done that, they all would have died. It was the single most important thing he did. God has a way out of situations, but we must find it, and to find it we must diligently seek Him for it.

He did not focus on the problem, but rather, he focused on getting the answer from God.

But when He, the Spirit of truth, comes, He will guide you into all the truth; for He will not speak on His own initiative, but whatever He hears, He will speak; and He will show you what is to come. John 16:13

Study the Bible and seek the Writer of the Bible. He will make it come alive and will speak specific things about your life and your future. Watch this video by Joyce Meyer.