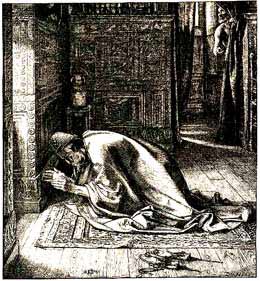 And he made from one man every nation of mankind to live on all the face of the earth, having determined allotted periods and the boundaries of their dwelling place, that they should seek God, in the hope that they might feel their way toward him and find him. Yet he is actually not far from each one of us, Acts 17:26-27 ESV

Man was made to seek God. It is this seeking of His face and His presence that allows us to hear the voice of faith (Romans 10:17 KJV). And faith, we are told, is the basis of answered prayer (Mark 11:24 KJV). When asked by His disciples to teach on prayer, Jesus responded with what is now called the Lord’s Prayer, and a teaching on perseverance.

And he said to them, “Which of you who has a friend will go to him at midnight and say to him, ‘Friend, lend me three loaves, for a friend of mine has arrived on a journey, and I have nothing to set before him’; and he will answer from within, ‘Do not bother me; the door is now shut, and my children are with me in bed. I cannot get up and give you anything’? I tell you, though he will not get up and give him anything because he is his friend, yet because of his impudence he will rise and give him whatever he needs. And I tell you, ask, and it will be given to you; seek, and you will find; knock, and it will be opened to you. For everyone who asks receives, and the one who seeks finds, and to the one who knocks it will be opened. What father among you, if his son asks for a fish, will instead of a fish give him a serpent; or if he asks for an egg, will give him a scorpion? If you then, who are evil, know how to give good gifts to your children, how much more will the heavenly Father give the Holy Spirit to those who ask him!” Luke  11:5-13

We do not seek Him because He is lost. He only appears hidden because there is always something through which or around which we must go to meet Him. He is there, just beyond the reach of this world. It is the part of the Christian walk of faith that most people miss. We run to Him with our problems, but we do not stay long enough to hear His answers. Seeking is where we draw close to Him and where He draws close to us (James 4:8). And if we continue on He will lift us up (James 4:10). He does this because He exists and is a rewarder of those that diligently seek Him (Hebrews 11:6).

Go ahead, seek Him with all that is in you. It is the loving humble act of relationship, and right relationship draws out communication, which is the basis of faith. See also – Isaiah 43:26 – The Process of Prayer

We run to Him with our problems, but we do not stay long enough to hear His answers.