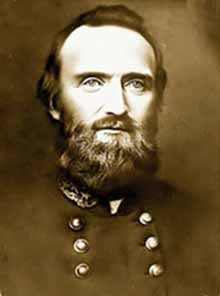 In General “Stonewall Jackson,” God found a true man who would stand in the gap. Both strong and tender, the motto of his life was, “Lord what wilt thou have me to do?” As fervent in the field of battle, so was Jackson on his knees in prayer.

As a general in the Confederate Army, “Stonewall Jackson” had a profound influence over his men. It was his holy and prayerful example that contributed to the great revival among the Southern troops. By midsummer of 1863, revival had spread to all the Confederate armies. A chaplain of the 26th Alabama Regiment said that his unit alone averaged 100 converts a week for several weeks. During this same time another chaplain declared that, ‘modern history presents no example of an army so nearly converted. A third of all soldiers in the field were men of prayer and members of some fellowship. J. W. Jones suggested that 150,000 conversions took place in Lee’s Army alone.

It was this revival that no doubt prepared the South for the humiliation that was to follow their eventual defeat, but best of all the revival prepared thousands of young and old alike to meet Christ in eternity (many only too soon). Truly, General Jackson impacted our history through the power of prayer.

It is amazing to me that someone, anyone, could be so close to God’s heart on so many issues and yet be so far off the mark on others. Here is man, a solid believing prayerful man, that was just that way. I am not knowledgeable on all the motivations that pushed the South into the Civil War but I cannot imagine that all of them were consistent with God’s heart and purpose.

This should be a warning for all of us not to just assume that we are always in the ‘right’ and that WE could never be deceived. President Abraham Lincoln whenever he heard people say that, “God was on their side in the war,’ was known to respond, “I don’t want to claim that God is on our side, I want to pray humbly that we are on God’s side.” Let us be people of prayer and people that humbly pray that we are always on God’s side.