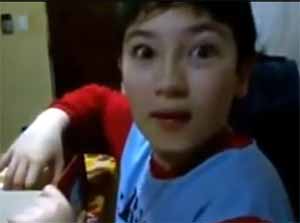 Somewhere in Argentina lives a ten-year old boy and his poor parents. It is his birthday. He really wants a tablet but they are very poor. First, he is given a prank gift of a simple cutting board, but he is not upset. He is grateful for anything. Then, he is given another box. This time he finds an expensive tablet inside. His face says it all. He realizes fully the sacrifice that his parents had made for him. He cares more about them giving it than him receiving it. The look on this boy’s face shows what thankfulness really looks like. Simply wonderful!

He cares more about them giving it than him receiving it.

In our Church’s Thanksgiving service this week they gave everybody five minutes to tell what God had done for them this year. One woman said that a couple of weeks ago she started to get disappointed for not receiving the breakthroughs that she wanted. She also said that God started to deal with her about it. He began to show her the things he had done for her during the course of the year. Little things, like restoring her broken relationship with her two daughters, who she had not spoken to in many years. And how she now had real friends who cared for her. She had never had that before. The list went on and on.

Of course, she started to realize just how thankful she should actually be to God. He had been wonderful to her in ways that she did not expect, but they were things she really needed.God gave her the deep desires of her heart. God is wonderful to all of us. We should all be as thankful as this child.