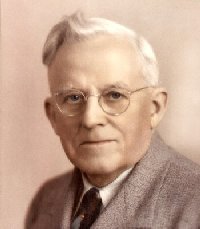 The following article by E.W. Kenyon relates the development of his ministry of healing. Some of Kenyon’s critics, most notably D.R. McConnell in his book A Different Gospel freely speculates that Kenyon learned healing under the influence of the metaphysical cults. The article below was written in the nineteen forties and Kenyon, of course, had no idea people would make up stories about his “supposed” history and influences! It is a pleasure to let Kenyon himself answer the speculations of his critics. Note that he tells what his attitude toward healing was before he discovered Biblical divine healing. This ought to answer forever the unwise and misguided accusations of his critics.

His Name On Our Lips Brings Healing

Christianity is a miracle. It has grown through the avenue of miracles throughout all the years since Pentecost.

To me one of the amazing things of Christianity is that the Name of Jesus in my lips or in your lips can heal the sick and set free those who are in bondage to the adversary.

In the early days of my ministry I found that God’s Word, spoken through my lips changed men’s lives and set them free.

The Name of Jesus in the lips of men today is as mighty as it was two months after the Resurrection of Jesus Christ.

I saw the first miracles of healing in my ministry in Springville, New York, where I was pastor.

Before this I had always been suspicious of anyone who claimed their prayers were answered along the line of healing.

I felt we had doctors and surgeons and sanitariums for that purpose. Why did we need anything else? I then firmly believed that God had given us the physicians and other methods of healing.

I knew nothing about the Name of Jesus and that healing was a part of the plan of Redemption, but my heart was very hungry and I was studying the Word diligently.

I had just received the Holy Spirit. The Word had become a living thing. I had awakened faith in many hearts by my new found love for the Word.

One day the clerk of our church came down and asked me if I would pray for his wife. She had been ill for many months.

I will never forget how I shrank from it. I had to go. She lay in bed and I prayed for her the best I knew how. I did not understand about the Name of Jesus, but God in His great grace honored me and she was instantly healed.

That night she came to church and gave her testimony. It created a great deal of sensation and some criticism. Some said it was time for her to get well anyway. A few gave credit where it belonged.

A young woman in a neighboring town was healed next. She was helpless, unable to walk. If I remember correctly, she had had an operation and it had left her in a fearful condition.

I prayed for her. She was instantly healed and got up and went about her work. She is now on our correspondence list.

From that day on healings came – not many, for not many people asked to be prayed for.

While we were holding services in Massachusetts, healing became more frequent. One day I discovered the use of the Name of Jesus. Then miracles became a daily occurrence.

I remember some instances in Northern Maine. The night I arrived in the town of Monticello for a campaign, my hostess told me that the woman across the street was very ill. She had had four operations and was no better.

She was in great pain. The next morning I called on her and I opened the Word and told her that I would pray for her the next afternoon when her husband came home, for I was very anxious to lead him to Christ.

She said, “I am in such pain, won’t you pray a little prayer for me now?” She was then instantly healed. She came to our service that night.

The next morning I was called to pray for a woman with gallstones. She was suffering greatly. She was instantly healed. Then she said, “My niece is here with erysipelas in one of her feet and legs, and she cannot step on her foot.”

They helped her into the room where I was, and I prayed and instantly she was dancing and shouting for very joy.

That happened over thirty years ago. Last year when I first went on KJR. I received a letter from her in New Brunswick, Canada, clear across the continent. She was able to get me on the air. She wanted to know if I was the man who had prayed for her in Monticello years ago.

While holding a campaign in Fredericton, New Brunswick, a man came down from Northern Main to receive a treatment at the hospital for an injured spine. He had been treated for months. He saw the notices of our meetings and he came in and asked me to pray for him. I had never met him before. I opened the Word and offered a little word of prayer and he went out.

I never saw him again at our services in Fredericton. In a few days I began to receive letters from Allagash in Maine saying that a man had been in my service and had been healed of an injured spine and they wanted us to pray for them. So many requests for prayer came and so many testimonies in regard to this man that a couple of my workers and myself went up to that great hunting and fishing section in Northern Maine.

We were there only three days opening the Word, but I have never seen God work as He did then. Several, who had written as the result of this man’s testimony, had received their healing. This added peculiar interest to the three days of services, and on the closing day when we prayed for the sick, many remarkable healings took place.

Man after man, and woman after woman came forward, or were led forward and were instantly healed.

I will never forget the joy of seeing a man and a woman who had been bedridden for years walking backwards and forth in the service while we were praying. One had not walked for 14 or 15 years and the other had not walked for 10 or 12 years. The last person for whom we prayed was a Roman Catholic, whose arm had been paralyzed for about two years. He gripped my hand and shook it for very joy.

In the town of Blaine we saw a great many healings. A school teacher who had been injured in an automobile accident came. She had lived in absolute agony. X-ray pictures showed a splintered spine. She was instantly healed.

I don’t know how many wrecked spines I have seen perfectly healed.

In San Francisco one was injured on a man-of-war and for three and a half years he lay in a plaster paris cast. Then when he was discharged from the hospital he wore a steel jacket. He was instantly healed, took off the steel jacket and could bend his body any way. The next day he swung a sledge in a blacksmith shop with the utmost freedom, with no sense of weakness.

Another one in Los Angeles was a hay buyer. While crawling through the hay in the dark in a barn, he fell down through a chute, striking his back upon a manger, utterly breaking and crushing his spine.

If I remember correctly, he said he had had 19 x-rays taken. He wore a steel jacket. When we prayed he was healed instantly. The next day he was able to load a car with 100-pound sacks of beans. He could not lift 5 pounds the day before when he had the steel jacket on.

Others here in the city of Seattle who have had crushed spines have been instantly healed.

I have seen curvature of the spine straightened instantly while our hands were on the back. I have seen many cases of pneumonia instantly healed, perfectly delivered while we were praying.

An elderly woman in Los Angeles had double pneumonia. The doctors had given her up. She was instantly healed, got up and dressed and went about the house.

One of the most remarkable cases happened in the last two years. A mother telephoned in, saying her daughter was already on the operating table about to take the anesthetic and asked me to pray for her. We did, and the thing for which they were going to operate passed instantly out of her body before they could give her the anesthetic.

All these things mean God is cooperating with us as He cooperated with the Lord Jesus.

I have seen hundreds of men and women healed while I have been in Seattle.

If any physician in the country had as many healings as we have witnessed in our ministry, he would be known the world over. No building would hold the patients that would come to his ministry.

Through all these years I have witnessed the power of that Name and the Grace of the Lord Jesus.