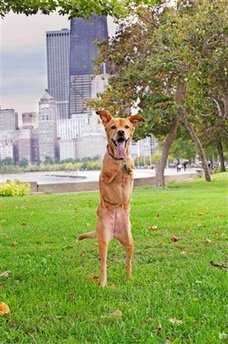 For several years, Jude Stringfellow and her Lab-chow mix have toured the country with a simple message: Faith walks.

Born without front legs to a junkyard dog around Christmas 2002, Faith the puppy was rejected and abused by her mother. She was rescued by Reuben Stringfellow, now an Army E-4 specialist, who had been asked to bury other puppies in the litter.

Faith the Dog inspires with two legs – “Can we fix her? Stringfellow, then 17, asked his mom. “No, but maybe we can help her,” she said.

So Reuben turned Faith over to his mother, English professor Jude Stringfellow. At first the family had to carry Faith to keep her off her chest and chin. But with peanut butter and practice, Faith learned to walk on her two hind legs.

Today Faith is a brisk, upright walker. When she runs, every so often she adds a hop or skip to her step, but she stumbles less often than most humans. She takes vitamins and joint supplements, and vets have declared her very healthy, Stringfellow said.

Since her first step on March 22, 2003, Faith has done the talk show circuit, gone on tour with Ozzy Osbourne and been named an honorary Army sergeant. Jude Stringfellow has become a motivational speaker and written two books. Next year, the two are moving from Ardmore, Okla., to Chicago where they plan to write a third called “Faith Walks.” Their website is ohmidog!