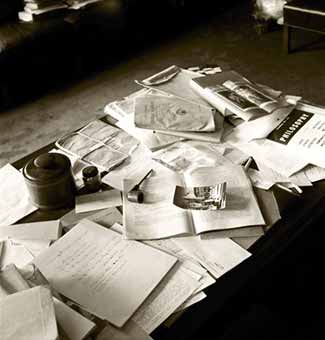 The photo is the desk of Albert Einstein the day he died on April 18, 1955. Seeing it made me think about death and its impact on our daily plans, our goals, and on what we will leave behind. When we die, all things stop and our time in this world ceases – never to be resumed. What a fascinating concept, this thing we call death. Suddenly abruptly we are gone. All of our efforts stop and all of our belongings go to others. God had His reasons for creating this universe and world the way it is. From the scriptures it seems that this life is simply a test.

And as it is appointed unto men once to die, but after this the judgment: Hebrews 9:27

I am also reminded of one of the last scenes in the movie Schindler’s List, when Oskar Schindler comes to grips with the good he has done and the realization that he could have done more. He now regrets not selling the few things he still has so that he could have saved more. His possessions mean nothing to him now. He now wonders why they ever meant anything to him at all? What a dramatic change in perspective the end brings.