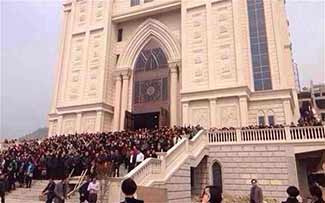 Sometimes I find myself wishing for persecution. It is actually the best thing for the true Church of God. It is that mysterious element that fans the flames of church growth and revival. Unfortunately, or fortunately, we in the United States will not have to wish for it. It is coming. Just look at the direction this country is going, and where the federal government is leading it.

Persecution promotes a childlike faith. It is primitive, simple, and yet, so incredibly effective. Its power is now being felt all over the globe. The hard places are seeing the greatest revival and miracles. It has always been like that.

Listen to some of these statements of persecution faith. They are taken from an article about hundreds of Chinese Christians who are defiantly and courageously standing up so their church will not be torn down by the government. Local party officials say it was built illegally and that it is unsafe. This is how a faceless atheistic bureaucracy works. This is the hard reality for Christians in China. See also this article.

He Hongying, an 81-year-old member of the resistance, said she would stay for as long as necessary. “I slept here last night and I will do the same again tonight. We pulled two pews together so it was quite all right. We feel at peace and fearless when we are with our God.”

Yang Zhumei, 74, said she had pleaded with officials to leave her church alone. “I held their hands and said, “Comrades, don’t take down our cross. I can give you my head instead.” “Even if they take my head, I can still find happiness with God,” she shouted.

Li Jingliu, who lost her right arm to an industrial accident and has been a church member for 34 years, said she would not allow her place of worship to be damaged. “I will guard the church until the very end, without fearing hardship or death,” she said. “God will punish those who try to take down the cross.”

These statements remind me of a young local Christian missionary in the east that was traveling and showing the ‘Jesus Film.’ He was brutally murdered, and upon hearing it, the missionary organization wondered, who in the world they could find to replace him. Who would want the job? They did not have to wonder long. Soon, they received over 50 requests from local men wanting to replace him. That is so beautiful and amazing.

“We feel at peace and fearless when we are with our God.”

Read our article about the Christians that lived during the early Roman Empire. All they had to do to enjoy the Roman peace and prosperity of that day was to be willing to embrace the Roman lifestyle and their pagan gods. They could keep their Jesus. But they would not. And they paid dearly for it. But the Church grew, and in less than 100 years over ten percent of the empire was Christian. And just over 250 years beyond that Constantine commanded that the empire be Christian.

“Even if they take my head, I can still find happiness with God.”

There are many Christians in terribly persecuted countries around the world, and their number is exploding. Pakistan officially says it has 3 to 5% Christians, but the real number is closer to 20%. I know, I have been there. Iran is also experiencing revival with many receiving Jesus and even having visions of Jesus. Many times, those that have made it to a church and have seen a picture of Jesus for the first time have said, “That’s the Man I saw in my dream; He told me to come here.”

“I will guard the church until the very end, without fearing hardship or death.”